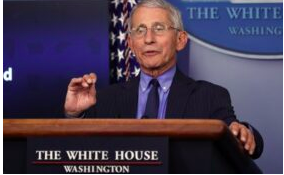 Fauci angrily rejected Paul’s insinuation that the U.S. helped fund research at a Chinese lab that could have sparked the COVID-19 outbreak.

In a stunning move, Paul later said he would ask the Department of Justice to open an investigation into Fauci — and if convicted, Fauci would face up to five years in prison.

Paul had earlier suggested that Fauci had lied before Congress when in May he denied that the National Institutes of Health funded so-called “gain of function” research — the practice of enhancing a virus in a lab to study its potential impact in the real world — at a Wuhan virology lab in China.

U.S. intelligence agencies are currently exploring theories that a leak from that lab could have led to the global pandemic.

“I have not lied before Congress. I have never lied. Certainly not before Congress. Case closed,” Fauci told Paul before the Senate Health, Education, Labor, and Pensions Committee, saying a study the senator mentioned referenced a different sort of virus entirely from the one responsible for the coronavirus outbreak.

He added, “If anybody is lying here, senator, it is you.”

Paul later told Fox News he was referring Fauci for criminal investigation for lying to Congress, which is a felony that has a maximum punishment of five years in prison.

“I will be sending a letter to the Department of Justice, asking for a criminal referral because he has lied to Congress,” Paul told Fox News star Sean Hannity on Tuesday night.

“We have scientists that will line up by the dozens to say that the research he was funding was gain-of-function,” Paul said.

He accused Fauci of trying “to cover his tracks and to cover his connection to Wuhan lab.”

The exchange was just the latest in a series of clashes between Paul and Fauci over the origins of the virus that caused the deadly global pandemic.

You can watch the explosive back-and-forth below —