Dr. McCollough: Outpatient Treatments for COVID-19 Have Been Suppressed 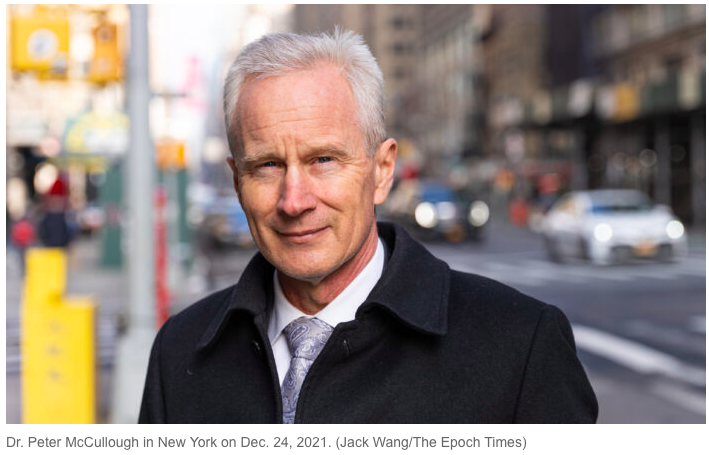 By Jan Jekielek and Masooma Haq

Dr. Peter McCullough told The Epoch Times that the public should question why the governments and public health officials around the world have put little to no emphasis on outpatient treatments in their efforts to fight the COVID-19 virus, instead promoting a massive effort on vaccines.

“Lots of messaging on the vaccine, but zero mentioning on treatment, none. And it’s been from the very beginning. There is a theme here, I hope everyone’s starting to get the theme. There is zero effort, interest, promotion, or care about early treatment, people who are sick with COVID-19,” said McCollough. “But there is a complete and total focus on people who don’t have COVID-19 and giving them a vaccine.”

McCullough is an internist, cardiologist, epidemiologist, and lead author of the first paper on early COVID-19 outpatient treatment involving a multi-drug regimen. In a recent interview with EpochTV’s “American Thought Leaders” program, he discussed a wide range of evidence on COVID-19 preventative treatments that are being used around the world.

He said that drug treatments must be prioritized in the effort to stamp out the threat of COVID-19. “So early treatment markedly changes spreads. So, we reduce new cases, we reduce the intensity and severity and duration of symptoms. And by that mechanism, we reduce hospitalization and death.”

The doctor cited some recent treatments that have been effective in killing the virus at the early stage of infection: Dr. Iqbal Mahmud Chowdhury conducted a protocol in Bangladesh that used a povidone-iodine rinse in the nose and eyes to kill the virus. Another treatment effort by a French doctor, Didier Raoult, who treated people using hydroxychloroquine, met with great success.

“Chowdhury is the first author recognizing the fact that the virus is in the air, people breathe it in, it settles in the nose, and it begins to replicate. And it has to get to a certain threshold and overcome the other organisms in the nose and overcome our own immune system to become a clinical infection. So, there’s about a three-to-five-day window to actually zap the virus directly.”

Masks and hand sanitizer are illogical and the data does not show them to be effective means to prevent COVID-19 infections because the virus is spread through the air, not hands, and is too small to be blocked by most masks said, McCollough.

McCollough said COVID creates “terrible inflammation” and hydroxychloroquine has been shown to be effective to reduce that, but instead of seeing an increase in using and studying the effectiveness of that drug, it has instead been restricted and in some countries, doctors can be jailed for using it to treat their patients.

In the United States, hydroxychloroquine can only be used in hospitals.

McCollough detailed the events that led to these restrictions, saying that for one, “there was a falsified paper published in Lancet … which claimed to have tens of thousands of patients with COVID-19, hospitalized at multiple centers around the world, in their 40s, hospitalized with COVID-19.” He said the supposed study was not verified and claimed the drug had negative health effects.

This “false” study led to medical professionals losing confidence in the drug and after which, “hospital messaging started to say, listen, don’t use hydroxychloroquine.

“The NIH pulled the program on a fully-funded trial in the midst of our initial wave of COVID-19. And then, shortly after that, the FDA put out a statement: hydroxychloroquine should not be used across the board, period.

“The next drug up on the block was Ivermectin.”

The FDA told The Epoch Times they are committed “to speed patient access to medicines to prevent or treat COVID-19 provided they meet the agency’s rigorous standards,” but that they believe the vaccines are the best way to prevent the disease and hospitalization.

McCollough says along with anti-hydroxychloroquine messaging, the drug Ivermectin was also maligned after that the American Medical Association gave an opinion against it.

“So, Americans saw the most confusing picture of hospitalized care of COVID-19 and a very confusing picture of outpatient treatment of COVID-19. My contributions, at least I tried to organize the outpatient treatment into concepts, where we would use drugs … in the middle phase treat inflammation, and in the late phase treat blood clotting; and we stuck with those principles all the way through,” said McCollough.

McCollough said it’s highly unusual for hospitals to not conduct trials on treatments for a disease, but with COVID-19 no major trials have been done to improve treatments and there have been no outcomes publicized by hospitals.

McCollough said improving treatments for those who are sick with COVID-19 has never been a priority for those in charge of public health because vaccines have been pushed from day one. He remembers how CVS pharmacies were advertising the vaccines even before they were fully authorized.

CVS confirmed to The Epoch Times that they were advertising the vaccines in October 2020.

He said the U.S. media has almost completely blocked out what is going on around the world with treatments for COVID. “Anywhere where there has been an early oral drug approach there has been success in terms of COVID-19. And now more recently, it was very fascinating, is anywhere where there’s any attention to decontamination in the nose and the mouth with direct by virucidal therapy. There have been stunning results.”

He questions why the United States has not reviewed the work being done around the world to treat the disease. “We haven’t seen panels of collaborating doctors. We’ve never seen a symposium on local therapy, what works best for the nose. No mention by public health officials.” McCollough says those leading U.S. public health agencies are incompetent.

McCollough suggests that there be a monthly review of new therapies used to treat COVID both at a national and global level, for doctors to review and learn from peers. “The idea that there’s no review, you’d think there would be the World Health Organization would actually assign a task force. This is the biggest public health problem, a monthly review of promising therapies.”

“So the treatment, inpatient and outpatient, of the biggest illness of our time, after two years, is an enigma.”