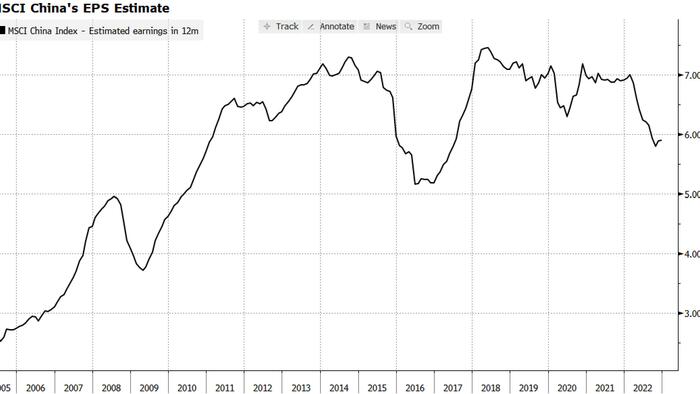 The MSCI China Index jumped 29% last month in its best performance since 1999. It looks like earnings expectations have bottomed.

With the relaxation, the risk now is of an explosive outbreak during the winter that overwhelms hospitals. For its part, the government has started a vaccination campaign, setting a target of 90% of people over 80 years old to take at least one dose by the end of January, according to Caixin.

2. Despite the easing of the Covid policy, economic activity remains deeply depressed. As many as 28 of 99 cities still impose heavy controls on mobility, according to Bank of America. Production and consumption softened, with auto sales slumping 31% year-on-year during the week ending Nov. 27.

3. China pivoted before the Fed. Fed Chair Jerome Powell essentially confirmed that that the central bank will slow the pace of its tightening to 50 bps at this month’s meeting. But he reiterated that the Fed will continue to raise rates until three conditions — further deceleration of goods prices, lower shelter inflation, and softening labor demand — fall clearly into place. On Friday, the job report showed that that condition isn’t there yet. Payroll growth exceeded expectations and wages surged by the most in nearly a year.