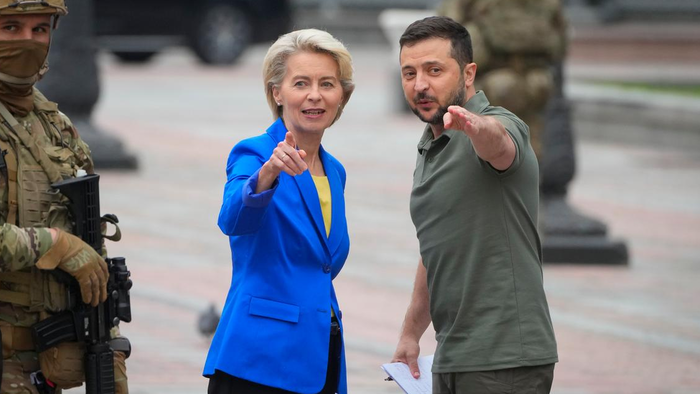 The EU is continuing its attempts to forge a legal pathway forward whereby it can seize frozen Russian central bank assets and divert them to funding Ukraine’s reconstruction, however, steep enough legal hurdles remain to have thus far thwarted the plans.

“We have blocked €300 billion of the Russian Central Bank reserves, and we have frozen €19 billion of Russian oligarchs’ money,” European Commission President Ursula von der Leyen boasted in a statement this week. And speaking of her goal of utilizing confiscated assets by EU member states to rebuild war-devasted Ukraine, she said further, “We will work on an international agreement with our partners to make this possible. And together, we can find legal ways to get to it.”

“Russia and its oligarchs have to compensate Ukraine for the damage and cover the costs for rebuilding the country. And we have the means to make Russia pay,” she contineud.

On Wednesday the European Commission issued legal options to be explored for making “Russia pay”, which is an attempt at “clarifying the international context, identifying ways to strengthen the tracing and identification of assets as preliminary steps for potential confiscation and exploring avenues that could lead to the confiscation of frozen Russian assets.”

The Wall Street Journal reviewed some of the building pressure for the EU to act more decisively and on a unified front as follows:

European Union officials said the bloc can’t confiscate tens of billions of euros worth of frozen Russian central-bank funds to pay for Ukraine’s reconstruction, while its executive body sent proposals to member states on setting up an international court to prosecute Russian officials for this year’s invasion.

Pressure had been building up for months from some member states for Brussels to come up with ways to seize Russian assets and hold top Russian leaders accountable for the war.

But the issue remains that among most member states, there are clear legal roadblocks making it difficult or impossible to seize frozen assets if the individual or entity in question has not first been convicted criminally.

On this question, US Treasury Secretary Janet Yellen pointed out starting months ago that confiscating Russian state assets “should not be done lightly, should be carried out only in co-ordination with allies and might require legislation in the US” – as the FT paraphrased of her words.

Addressing the much bigger money pot of frozen Russian central bank assets, one EU official was quoted in European media as saying, “We think that we can create a structure that would allow us to actually actively manage these assets and use the proceeds of managing those assets, with the returns to be able to support Ukraine.”