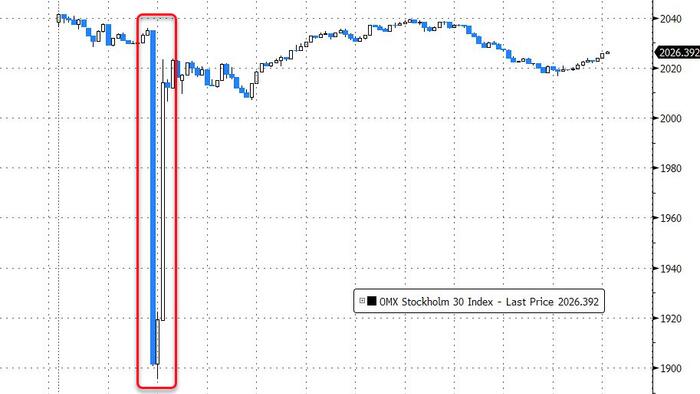 Shortly before 4amET, European stock markets suddenly puked down to last week’s lows with no obvious technical and news-driven catalyst…

The source of the sudden weakness stemmed from the Nordic region where the OMX Stockholm 30 Index slumped as much as 8% in just five minutes before recovering most of the losses shortly after… “It’s most certainly a ‘Nordic Flash Crash’,” said Joakim Bornold, savings economist at Soderberg & Partners

David Augustsson, spokesman for Nasdaq Stockholm, was quick to point out that it wasn’t a technical glitch on their part.

Notably the flash-crash tested down to early March lows before reversing, strongly suggesting a massive liquidity hole, especially with British markets closed for a bank holiday…

However, instead of admitting the waterfall-like actions of algos that are the usual culprit in these ‘flash-crashes’, Augustsson claims that “It is very clear to us that the cause of this move in the market is a very substantial transaction made by a market participant,” and added that Nasdaq will not cancel any trades made on the Nordic markets.