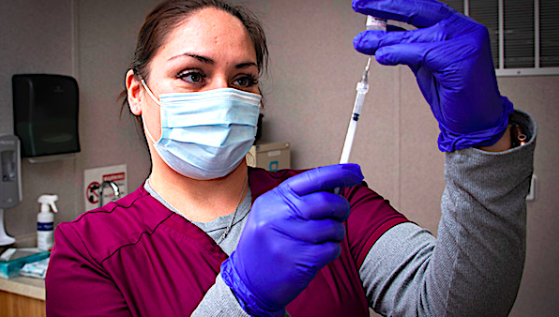 Germany, France, Italy, Spain and other nations have suspended the use of AstraZeneca’s COVID-19 vaccine over concerns it is linked to blood clots.

The manufacturer denies any link, but an official with with the European Union’s agency in charge of evaluating medicines believes there is a “clear association” between the two.

Reuters reported Marco Cavaleri, the chairman of the the European Medicines Agency team evaluating the vaccine, said that in his opinion, “we can now say it, it is clear that there is an association (of the brain blood clots) with the vaccine.”

“However, we still do not know what causes this reaction,” he told the Italian daily Il Messagero.

A spokesman for AstraZeneca declined comment to Reuters, and the EMA later issued a statement saying its review was continuing.

Reuters reported the EMA “has repeatedly said the benefits of the AstraZeneca shot outweigh the risks as it investigates 44 reports of an extremely rare brain clotting ailment known as cerebral venous sinus thrombosis (CVST) out of 9.2 million people in the European Economic Area who have received the vaccine.”

AstraZeneca, one of multiple companies that developed a COVID-19 vaccine over the last year, said it has found no higher risk of clots than normal from its product.

“Cavaleri said the EMA would say in its review that there is a link but was not likely to give an indication this week regarding the age of individuals to whom the AstraZeneca shot should be given,” the report said.

Just days ago, EMA said it had not identified “any specific risk factors, such as age, gender or a previous medical history of clotting disorders.”

The report said a high proportion among the reported cases involved young and middle-aged women.

European investigators have speculated that the vaccine triggers an unusual antibody in some rare cases. Another speculation was that some cases are linked with birth control pills.

It’s not the first suggestion of  a link, the report said.

“In a separate interview, Armando Genazzani, a member of the EMA’s Committee for Medicinal Products for Human Use (CHMP), told La Stampa daily that it was ‘plausible’ that the blood clots were correlated with the AstraZeneca vaccine.”

The report said Norway “reported three deaths among people who developed blood clots and hemorrhaging after receiving the vaccine.”

WND previously reported 54,571 adverse events have been reported in Europe in association with the AstraZeneca vaccine, including 198 deaths.

The concerns were raised initially when Denmark suspended use of the vaccine, followed by Ireland, Thailand, the Netherlands, Norway, Iceland, Congo and Bulgaria.

Content created by the WND News Center is available for re-publication without charge to any eligible news publisher that can provide a large audience. For licensing opportunities of our original content, please contact