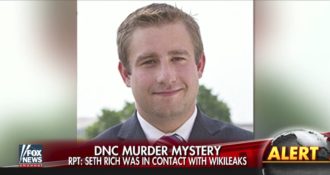 An eyewitness to the shooting of Seth Rich, believed to be his neighbor, claims that he was at the scene of the shooting and that Rich was walked right past him and didn’t even know he had been shot.

The following is a video is from the vigil for Seth Rich on July 14, 2016.  We start the video at 6:29 because that is when the neighbor, Mark Mueller, speaks out about being at the scene when Rich was walked past him.  Mueller was listed on the police report when Rich was shot on July 10, 2016.

“I was there when he [Seth Rich] got shot and uh they walked him past me so that I could see him and identify him because I knew him in the neighborhood — and the police officer said: ‘he didn’t even know he was shot’,” Mueller said.

That’s a pretty shocking revelation considering what we have heard in the news.

Also, notice that former DNC Chair Debbie Wasserman Schultz was at this vigil, as well.

As Shepherd Ambellas of Intellihub reports, Mueller may have used the alias Scott Roberts.  Ambellas added this piece of information concerning the alias.

A timeline of Seth Rich related tweets and retweets by Twitter user “@ScottRobertsDC” starting the day Rich was shot as follows:

Flagler & W St shooting update (this update is from a neighbor, not @DCPoliceDept): victim has died https://t.co/xxhAT7onLp #BloomingdaleDC

Now, the tweet by Scott Roberts could be someone who is not Mueller.  In fact, it might be likely that Mueller conveyed the information to Roberts since Roberts specifically tweets, “this update is from a neighbor, not @DCPoliceDept.”  That seems most likely.  However, there is at least an eyewitness to Rich being alive at the time of the shooting.

This leads to questions as to why surgeons claimed he had non-life threatening wounds and that hospitals are not speaking out about anything regarding their care of Mr. Rich.

As Alicia Powe at WND reported:

Murdered DNC staffer Seth Rich was likely treated at one of two hospitals near the Washington, D.C., intersection where police found him shot in the back in July 2016, but those hospitals are refusing to answer any of WND’s questions about the unsolved crime.

WND contacted MedStar Washington Hospital Center and Howard University Hospital – two hospitals located within a one- to two-mile radius of the 2100 block of Flagler Place NW, where Rich was shot in the early hours of July 10, 2016. Howard University Hospital is three blocks east of the shooting site, and MedStar Washington Hospital Center is less than two miles to the north.

When WND sought an interview with hospital officials and a media representatives of MedStar Washington Hospital Center, administrators refused to answer questions and instead summoned security guards. WND also called and emailed both hospitals.

MedStar’s director of media relations, So Young Pak, would not confirm whether Rich was treated at the hospital. Pak also said the hospital cannot release information about any patient and cited the federal Health Insurance Portability and Accountability Act of 1996, also known as HIPAA.

“I am not permitted to reveal any information about any patient of this hospital, whether that patient is living or deceased,” Pak told WND. “Journalists are not permitted in any hospital in the nation unless escorted by a director of media relations.”

Pressed to merely confirm whether Rich was admitted and treated at MedStar, Pak said, “All information is subject to federal privacy laws, and thus we cannot respond to the question.”

Howard University Hospital also declined to respond to WND’s multiple requests for confirmation that Rich was treated in its facility.

When WND inquired about whether Freeman would have the information at a later time, he simply replied, “You can follow up with me.”

Now, it does make sense that a hospital would not provide such information unless it was released by the patient or their family.  This is pretty common practice, but seriously, to not confirm whether a man was treated at your hospital doesn’t seem to be an issue that couldn’t be confirmed.

Additionally, a person claiming to be a  4-year resident surgeon at Washington Hospital Center took to 4chan to claim that Rich was alive and had non-life-threatening wounds.

4th year surgery resident here who rotated at WHC (Washington Hospital Center) last year, it won’t be hard to identify me but I feel that I shouldn’t stay silent.

Seth Rich was shot twice, with 3 total gunshot wounds (entry and exit, and entry). He was taken to the OR emergently where we performed an exlap and found a small injury to segment 3 of the liver which was packed and several small bowel injuries (pretty common for gunshots to the back exiting the abdomen) which we resected ~12cm of bowel and left him in discontinuity (didn’t hook everything back up) with the intent of performing a washout in the morning. He did not have any major vascular injuries otherwise. I’ve seen dozens of worse cases than this which survived and nothing about his injuries suggested to me that he’d sustained a fatal wound.

In the meantime he was transferred to the ICU and transfused 2 units of blood when his post-surgery crit came back ~20. He was stable and not on any pressors, and it seemed pretty routine. About 8 hours after he arrived we were swarmed by LEOs and pretty much everyone except the attending and a few nurses was kicked out of the ICU (disallowing visiting hours -normally every odd hour, eg 1am, 3am, etc- is not something we do routinely). It was weird as hell. At turnover that morning we were instructed not to round on the VIP that came in last night (that’s exactly what the attending said, and no one except for me and another resident had any idea who he was talking about).

No one here was allowed to see Seth except for my attending when he died. No code was called. I rounded on patients literally next door but was physically blocked from checking in on him. I’ve never seen anything like it before, and while I can’t say 100% that he was allowed to die, I don’t understand why he was treated like that. Take it how you may, /pol/, I’m just one low level doc. Something’s fishy though, that’s for sure.

This seems to fit the account of Mueller, as well, though discovering who the surgeon is becomes another issue.  Obviously, Mueller is not a doctor, but his comments seem to indicate that Rich was coherent enough to make statements about what he was feeling at the time.

Finally, take a listen to Democrat operative Brad Bauman, who was taped in a phone interview regarding Rich’s murder.  Listen to how this guy behaves and responds to questions.  Keep in mind he is the man who claims that two DC investigators, one at the federal level have made unsubstantiated claims about Rich’s ties to Wikileaks, but the evidence suggests otherwise.

Tell me there is not a coverup going on surrounding Rich’s murder.

The post Eyewitness to Seth Rich Shooting “He Didn’t Even Know He Was Shot” appeared first on The Constitution.