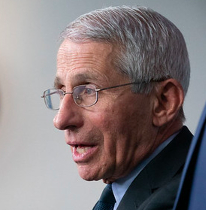 In an interview with MSNBC, Fauci took aim at their sharp criticism of his actions and policy pronouncements.

“I’m not in it for a popularity contest,” Fauci said Tuesday. “I’ve devoted my entire professional career of 50 years to try and essentially safeguard and preserve the health of the American people.

Fauci, the director of the National Institute of Allergy and Infectious Diseases since 1984, said that “as an infectious disease doctor who deals with outbreaks, that gets really extended to the rest of the world.”

“The praise or the arrows and slings are really irrelevant. I do what science drives you to do,” he said.

Fauci said he’s simply “trying to save lives, and the people who weaponize lies are killing people.”

“When you show Tucker Carlson and Peter Navarro criticizing me, I consider that a badge of honor,” he said.

Fauci characterized them as “those people that make those ridiculous statements.”

“As they say in my old neighborhood in Brooklyn, ‘Give me a break, will ya.'”

In June, amid growing evidence that the novel coronavirus was leaked from a lab funded by his agency, Fauci declared in an MSNBC interview that criticism of him amounts to attacks on science itself.

‘More damage’ to the nation ‘than anyone else’
Navarro, in his new book “In Trump Time, A Journal of America’s Plague Year,” writes that Fauci did “more damage to this nation, President Trump and the world than anyone else this side of the Bat Lady of Wuhan.”

Fauci, writes the former Trump aide, is responsible for “everything from the Wuhan lab gain-of-function catastrophe and suppression of low-cost therapeutics such as hydroxychloroquine and ivermectin to the political, partisan and deadly delay in delivering the Trump vaccines to the American people.”

Navarro also criticizes Fauci for not telling Trump or the coronavirus task force that he knew the Wuhan lab was conducting risky gain-of-function research on bat coronaviruses and that his NIAID helped fund it.

Fauci, Navarro writes, “went behind the back of the Trump White House in 2017 to lift the ban on dangerous ‘gain-of-function’ experiments.”

‘There is no science without disagreement’
Carlson did a long-form interview on his Fox Nation show with Dr. Scott Atlas, who briefly served as a member of the coronavirus task force during the Trump administration.

Atlas said he was astonished at the “lack of knowledge about the data” displayed by Fauci and other members of the team.

“They never cited a scientific study. They never knew a critical assessment. They never gave a refutation of any study, nor a refutation or disagreement of each other. Never. Not once. I mean, that’s unheard of in science,” Atlas said.

“There is no science without disagreement.”

Noting that for many years he was a reviewer of National Institutes of Health grants and scientific studies, Atlas said that during his time as a health adviser to Trump, he was “talking almost every day to some of the world’s best epidemiologists about the data.”

Meanwhile, the members of the coronavirus task force never showed any indication that they were familiar with the scientific studies, never citing a single one.

Atlas said he has never worked with members of team that displayed such a low level of competence.

“I’m not sure these people could have been assistant professors where I worked,” he said, noting his background at the University of Chicago, University of Pennsylvania, Mount Sinai Hospital in New York and Stanford University.

“I mean there was a lack of critical thinking, a lack of preparation. No one cited data (who was) above me.”

Atlas, currently a senior fellow in health care policy at the Hoover Institution at Stanford, is promoting a book on his experience at the White House, “A Plague Upon Our House: My Fight at the Trump White House to Stop COVID from Destroying America.”

"I have never worked with people at this level in my career, and I'm not saying at a high level, I'm saying at a low level … I'm not sure these people could have been assistant professors where I worked." pic.twitter.com/bTTEtOnz9i

‘Reality and scientific studies have now caught up with him’
Earlier this month, two experts on infectious disease outbreaks charged that Fauci has given the wrong answers to the major epidemiological and public health questions posed by the COVID-19 pandemic.

In a column published by Newsweek.com. Drs. Martin Kulldorf of Harvard and Jay Bhattacharya of Stanford write that when the pandemic hit, America “needed someone to turn to for advice.”

The media and public turned to Fauci, they write, but now “reality and scientific studies have now caught up with him.”

Kulldorff is an epidemiologist, biostatistician and professor of Medicine at Harvard Medical School. Bhattacharya is a professor of Health Policy at Stanford University School of Medicine. They are the co-authors, along with Dr. Sunetra Gupta of the University of Oxford, of the Great Barrington Declaration, advocating a public policy of “focused protection” on the vulnerable while letting others go about their business. More than 860,000 people have signed the declaration, including 14,981 medical and public health scientists, and 44,167 medical practitioners.

Here are the key issues that Fauci got wrong, they contend:

Natural immunity: “By pushing vaccine mandates, Dr. Fauci ignores naturally acquired immunity among the COVID-recovered, of which there are more than 45 million in the United States.”

Protecting the elderly: “While anyone can get infected, there is more than a thousand-fold difference in mortality risk between the old and the young.”

School closures: “Schools are major transmission points for influenza, but not for COVID.”

Masks: “For children, there is no solid scientific evidence that masks work.”

Contact tracing: “For a commonly circulating viral infection such as COVID, it was a hopeless waste of valuable public health resources that did not stop the disease.”

Kulldorf and Bhattacharya said that most of their scientific colleagues agree with them on those points.

“While a few have spoken up, why are not more doing so? Well, some tried but failed. Others kept silent when they saw colleagues slandered and smeared in the media or censored by Big Tech.”

Some who have remained silent are government employees forbidden from contradicting official policy. Others fear losing their positions or research grants, “aware that Dr. Fauci sits on top of the largest pile of infectious disease research money in the world.”

“Most scientists are not experts on infectious disease outbreaks. Were we, say, oncologists, physicists or botanists, we would probably also have trusted Dr. Fauci,” Kulldorf and Bhattacharya say.

Now, governors, journalists, scientists, university presidents, hospital administrators and business leaders need to open their eyes and examine the evidence that has mounted over the past year and a half, they write.

“After 700,000-plus COVID deaths and the devastating effects of lockdowns, it is time to return to basic principles of public health.”