FBI official won’t answer whether Ray Epps is ‘a fed’ 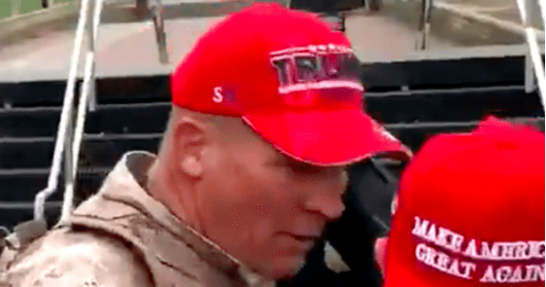 In a Senate hearing Tuesday, the FBI’s assistant executive director for the national security branch, Jill Sanborn, repeatedly said she could not answer whether or not a man seen on video urging people to go into the Capitol the eve of Jan. 6 and then directing the initial breach of barriers was an FBI informant.

Finally Sen. Ted Cruz, R-Texas, asked Sanborn what he described as not a law enforcement question, but one of “public accountability.”

“Not to my knowledge, sir,” Sanborn replied.

Cruz began his questioning with: “How many FBI agents or confidential informants actively participated in the events of January 6th?”

Sanborn replied: “Sir, I’m sure you can appreciate that I can’t go into the specifics of sources and methods.”

The FBI official also said she could not answer whether or not any bureau agents or confidential informants committed or actively encouraged crimes of violence on Jan. 6.

Cruz then asked, “Who is Ray Epps?”

“I’m aware of the individual, sir. I don’t have the specific background to him,” Sanborn replied.

Cruz showed images of the video evidence as he recounted that a crowd surrounding Epps on the night of Jan. 5 chanted “fed, fed, fed” as Epps urged people to go inside the Capitol the next day.

The Texas lawmaker also showed an image of Epps whispering into the ear of a man who was seen five seconds later breaking down the barrier. And he noted that Epps was removed from the FBI Most Wanted list without explanation and never was charged.

“No one has explained why a person videoed urging people to go to the Capitol, a person who’s conduct was so suspect the crowd believed he was a fed, would magically disappear from a list of people the FBI was looking at,” Cruz said.

Later Tuesday, the House Select Committee to Investigate the January 6th Attack on the United States Capitol issued a statement regarding Epps. The committee said it had spoken with Epps and he denied being an FBI informant or working for law enforcement.

On Twitter, Rep. Adam Kinzinger of Illinois, one of the two Republicans on the committee, along with Rep. Liz Cheney, R-Wy., mocked Cruz and others who point to the fact that Epps clearly was involved in inciting the riot yet has not been charged.

“One more @tedcruz conspiracy down. Ray Epps has cooperated and is nothing but a Jan 6 protest attendee, in his own words. Sorry crazies, it ain’t true,” Kinzinger wrote.

The committee said in its statement that it is “aware of unsupported claims that Ray Epps was an FBI informant based on the fact that he was on the FBI Wanted list and then was removed from that list without being charged.

"How many FBI agents or confidential informants actively participated in the events of January 6th?"

"Who is Ray Epps?" pic.twitter.com/Haufq3kym2

Epps was dropped from the FBI’s Most Wanted list related to Jan. 6 one day after Revolver New reported the FBI was protecting known Epps associate and Oath Keepers leader Stewart Rhodes. Revolver News probed Epps role in Jan. 6 in an October report then published a follow-up in December, with visual and other evidence that others worked in tandem with Epps. Yet, like Epps, they have not been pursued by the Justice Department.