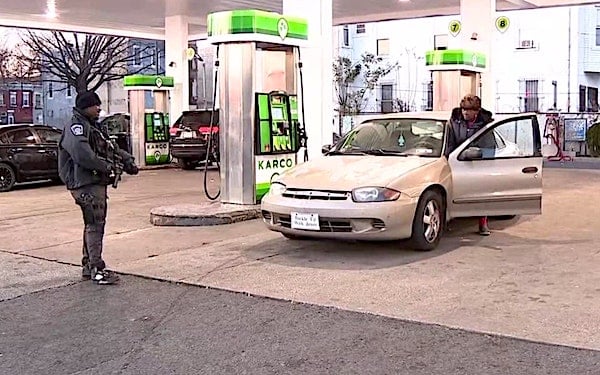 It’s exactly the opposite that’s happened over and over again, mostly in Democrat-run cities where the “defund” agenda is more developed.

So he’s hired guards to patrol his property – and they are armed with AR-15 rifles.

He said the move became necessary because his store has been ransacked repeatedly.

“We are tired of this nonsense: robbery, drug trafficking, hanging around, gangs,” he explained. “They are forcing us to hire the security, high-level security, state level.”.

His decision came after a recent attack in which “young people” vandalized his business and stole an ATM.

Fox reported Chief Andre Boyer said, “We wear Kevlar, we are trained, my guards go to training every other week, they’re proficient with [their guns] and with their taser, they know the law.”

“Incidents” at the station, since the guards arrived, have stopped, Patel said.