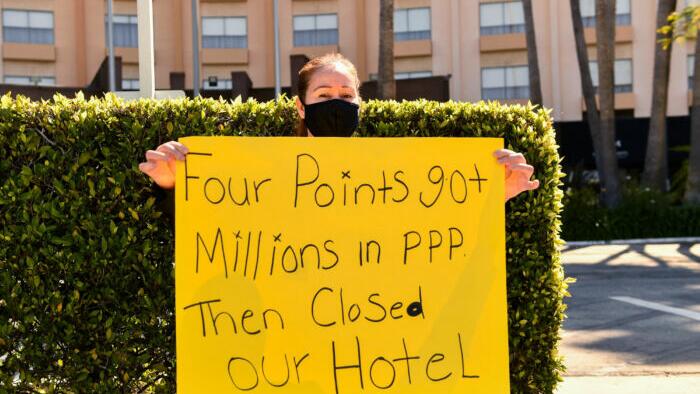 Authored by Mark Tapscott via The Epoch Times (emphasis ours),

Federal officials forgave $809 million in Paycheck Protection Program (PPP) loans handed out during the COVID-19 pandemic in 2020 to more than 100 of the nation’s top law firms and another $635 million given to hundreds of elite accounting offices, according to a new analysis of government spending to be made public on Dec. 2.

As described by the Department of Treasury, the PPP was established in 2020 to provide “small businesses with the resources they need to maintain their payroll, hire back employees who may have been laid off, and cover applicable overhead.”

The program was administered by the federal Small Business Administration, which made $787 billion in federal loans to companies and firms spanning all industries. The vast majority of the “loans” were subsequently turned into grants, which didn’t require repayment.

An investigation by Open the Books found that hundreds of millions of federal tax dollars went to top law and accounting firms even though most of them didn’t qualify as small businesses and didn’t have to lay off employees.

Open the Books is a nonprofit watchdog that uses public information laws such as the federal Freedom of Information Act to make government spending public, including “every dime online, in real time.”

The Epoch Times obtained an advance copy of the investigative report.

Auditors “found an astonishing $1.4 billion in forgiven PPP loans that flowed to the largest and most successful law and accounting firms across America,” the report stated.

“Today, it is an open question whether many of the firms needed a taxpayer subsidy to ‘save’ any jobs during the Covid-pandemic. Many racked up record revenues while their equity partners made millions of dollars.

“For example, in the years 2020 and 2021, we found equity partners individually received $7 million in profits while their law firms received $10 million in forgiven PPP ‘loans.’ The Guam office of Ernst & Young, a Big Three accounting firm with 365,000 employees, took a $750,000 forgiven loan.

“In 2020, millions of mom and pop businesses on Main Street had to shut down during the forced economic lockdown [occasioned by the pandemic]. So, Congress created the Paycheck Protection Plan (PPP) to compensate those businesses for their economic losses.

“Firms with 500 employees or fewer met eligibility requirements. However, Congress didn’t anticipate that Biglaw and the largest accounting firms would cash in so profitably.”

Boies also gained national notoriety by representing the Department of Justice in its successful prosecution of Microsoft, and he headed a legal team that challenged California’s Proposition 8, which banned same-sex marriages. The proposition was approved in 2008 by voters, but the Supreme Court effectively nullified it in a 2013 decision.

His firm’s PPP debt was forgiven in October 2021 under the Biden administration, even though during the period covered by the loan “the firm’s equity partners earned $4.5 million each in profit compensation—receiving $2.219 million (2021) and $2.283 million (2020). The firm billed clients $480 million during this two-year period,” Open the Books found.

The second-biggest law firm beneficiary of PPP loans was the Birmingham, Alabama-based Maynard Cooper & Gale, which received $10.13 million under the pandemic relief program. Even so, the firm’s workforce increased from 247 in 2019 before the pandemic, to 260 in 2020 during the pandemic, and 283 in 2021.

Among the big accounting firms getting tax dollars, Prager Metis CPAs in New York City received $10.2 million, which was forgiven in June. Revenues for 2021 reached $139 million, an increase from 2020’s total of $123.9 million.