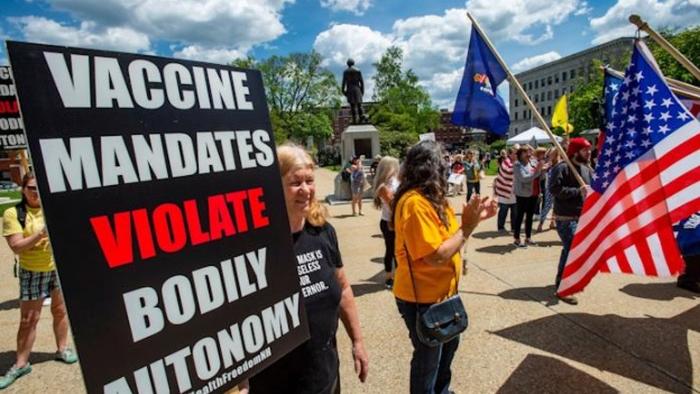 As the FDA bucks President Biden’s booster jab push, a group of federal workers and contractors are suing President Biden to try and stop his sweeping federal vaccine mandate, according to media reports.

The lawsuit, filed in Washington Thursday, challenges President Joe Biden’s executive edict requiring all federal workers and contractors to be vaccinated, alongside the August memorandum requiring members of the military to be vaccinated to protect against COVID. Biden has opposed offering honorable discharges for soldiers who are vaccine objectors.

Among the arguments made in the lawsuit, lawyers claim that Christians are required “to refuse a medical intervention, including vaccination, if his or her informed conscience comes to this sure judgment”.

The federal workers aren’t the only group suing Biden over the mandate. The RNC has said it plans to sue Biden over the vaccine mandates, with RNC head Ronna McDaniel arguing the mandates are “unconstitutional”, and that Biden had promised not to impose mandates when he was elected.

“Joe Biden told Americans when he was elected that he would not impose vaccine mandates. He lied. Now small businesses, workers, and families across the country will pay the price,” she said.

“Like many Americans, I am pro-vaccine and anti-mandate,” she said. “Many small businesses and workers do not have the money or legal resources to fight Biden’s unconstitutional actions and authoritarian decrees, but when his decree goes into effect, the RNC will sue the administration to protect Americans and their liberties.”

Other prominent Republican officials have also threatened to sue, with Arizona becoming the first state to sue Biden over the mandate earlier this month. Americans’ resistance to the vaccine has frustrated the White House, which has struggled to get the latest delta-driven COVID wave under control.