Fiery But Peaceful In Atlanta? CNN Once Again Suggests That Leftist Riots Are Not Violent 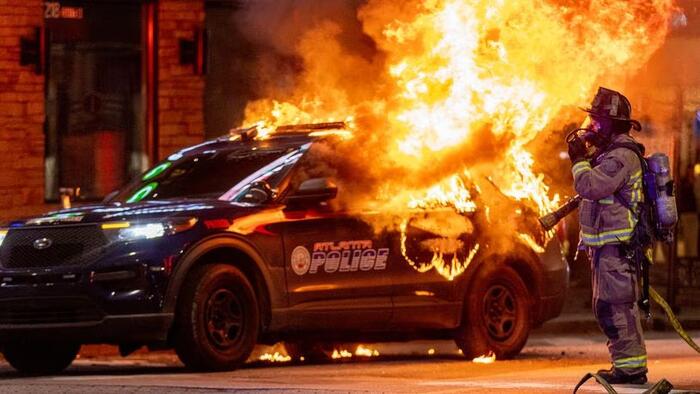 If there is one strategy that the political left relies on more than any other in their quest for better optics, it’s the strategy of gaslighting.

And, CNN is often at the forefront of many gaslighting campaigns when it comes to Antifa, BLM, or any other far left group that resorts to violence and property destruction in the name of “social justice.”

Recent riots in Atlanta by members of Antifa are bringing back memories of 2020 and 2021 when CNN called leftist riots “fiery but peaceful,” a level of propaganda that should only be seen in dystopian sci-fi movies but is now very real.

Well, the media outlet is at it again, platforming journalists who are more interested in spinning events to their political advantage rather than pursuing the truth.

CNN’s guest suggests we shouldn’t use the word “violent” to describe the Antifa riots in Atlanta tonight.

It should be noted that the attacks in Atlanta were triggered after Antifa members allegedly fired on police officers as they entered an “autonomous zone” at the site of the future $90 million Atlanta Public Safety Training Center in a ‘clearing operation’ on Wednesday.

One officer was injured during the exchange, and one Antifa member was killed.  In response, Antifa blamed Atlanta police and called for a ‘Night of Rage’.

Another reality to consider is that if a firefight broke out between conservative activists or a “militia” and police over an “autonomous zone”, and conservatives rioted in response, the same media talking heads would be incensed with anger and making accusations of terrorism and insurrection.  The double standard in favor of leftist activists is a defining narrative of our era.