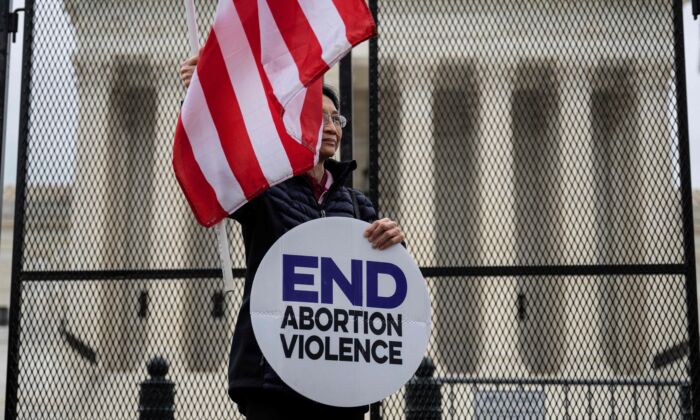 A pro-life demonstrator stands in front of the U.S. Supreme Court in Washington on May 5, 2022. (Jim Watson/AFP via Getty Images)
By Rita Li

The Georgia Supreme Court on Nov. 23 reinstated the state’s ban on abortions after six weeks into a pregnancy. The move temporarily ends access to later abortions ruled by a state judge a week ago.

In a single-page ruling (pdf) issued Wednesday, the court overturned a lower court’s recent decision to block the Georgia law. The Supreme Court’s order giving a stay in the case means the law is reinstated while the court considers an appeal on the merits from Georgia Attorney General Chris Carr, a Republican.

“The state of Georgia’s emergency petition […] seeking a stay of the order of the superior court of Fulton county in the above-styled action is hereby granted,” the order said. “To the extent the state also seeks an ‘administrative stay,’ that motion is dismissed as moot.”

The court didn’t address the reason for granting the state’s request.

Fulton County Superior Court Judge Robert McBurney declared on Nov. 15 the state’s ban on abortions was unlawful at the time it was enacted—when the 1973 Roe v. Wade decision was still in place and concluded abortion was protected under the Constitution.

The Georgia House Bill 481, known as the LIFE Act, was signed into law by Republican Gov. Brian Kemp in 2019, and had been blocked for three years until the U.S. Supreme Court struck down Roe and a similar ruling this June, allowing states to decide on abortion by themselves.

The state’s ban prohibits most abortions once a “detectable human heartbeat” is present.

Cardiac activity can be detected by ultrasound in cells within an embryo that will eventually become the heart around six weeks into a pregnancy. That means most abortions in Georgia are effectively banned at a point before many people know they are pregnant.

McBurney ordered authorities last week to stop enforcing the statewide measure. In his ruling, the judge said the timing made the law immediately invalid, and to enact the law, the state legislature would have to pass it again.

Georgia attorney general’s office in a filing with the state Supreme Court blasted McBurney’s reasoning as having “no basis in law, precedent, or common sense,” and appealed to ask the Georgia Supreme Court to put the decision on hold while the appeal moved forward.

Plaintiffs’ attorneys defended it in a reply and warned of “irreparable harm” to women if it were put on hold. They also asked the high court for 24 hours’ notice before issuing any stay to “avoid the potential chaos” from resuming the ban while women waited for an abortion or were in the middle of getting one.

The state Supreme Court did not conduct a hearing before issuing its order, and plaintiffs’ attorneys said it denied their request for 24 hours notice.

The high court’s order said seven of the nine justices agreed with the decision. It said one was disqualified and another did not participate.

Alice Wang, an attorney with the Center for Reproductive Rights, which also represents plaintiffs in the case, said the latest court order is “outrageous,” adding that “This legal ping pong is causing chaos for medical providers trying to do their jobs and for patients who are now left frantically searching for the abortion services they need.”

Some abortion providers had said that although abortions past six weeks were once resumed, they were proceeding cautiously over concerns the ban could be quickly reinstated.

Official data cited by the Atlanta Journal-Constitution show 34,988 abortions have been performed in 2021 on Georgia residents, meaning on average one in every 100 females between the ages of 10 and 55 undertook abortion.

Currently, a dozen states, including Georgia, have either fully or partially outlawed abortion in the wake of the Roe abolition, yet half of the states temporarily halted the bans in subsequent court rulings.