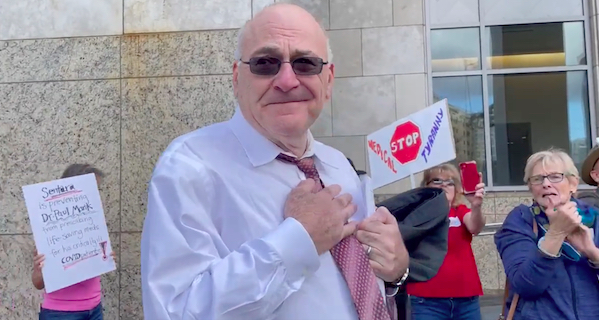 Dr. Paul Marik arrives at a courthouse in Norfolk, Virginia, on Nov. 18, 2021, to ask for an order allowing him to treat his COVID-19 patients with ivermectin (Twitter video screenshot)

A physician who also is a medical school professor is suing a hospital for banning him from prescribing the drug ivermectin to his COVID-19 patients.

Dr. Paul Marik of Eastern Virginia Medical School is under contract with Sentara Norfolk General Hospital, where he is the director of the ICU.

On Thursday, he arrived at a Norfolk, Virginia, courthouse, where supporters cheered, chanted his name and held signs. One sign told of a husband now in ICU with COVID-19 who is being denied treatment with ivermectin and another of a husband who died.

With his right hand on his heart, displaying gratitude, Marik was greeted with shouts of “God bless you Dr. Marik” and “God bless you St. Paul, you go!”

Supporters of Dr. Paul Marik greet him as he enters a Norfolk, Virginia, courthouse Nov. 18, 2021, to ask for an order allowing him to treat COVID-19 patients with ivermectin (Twitter video screenshot)

He was in court Thursday to ask for a temporary order allowing him to dispense the drug while his case progresses.

“Can you understand the toll that that takes that I have young patients – young patients in the 30s and 40s, who I had to watch die – while the hospital prevented me from giving them the treatment I thought was in their best interest?”

His lawsuit argues Virginia’s Advanced Directive statute gives hospitalized patients the right to choose what treatment they receive as long as a doctor determines it to be appropriate.

Marik told local WAVY-TV that the issue is bigger than one particular drug.

“This is not about ivermectin. This is about the bedside doctor being able to do what doctors have been doing for decades, and what doctors do across the world,” he said. “Doctors decide what is the best treatment for their patients, and they alone are responsible for the patient and the treatment of the patient.”

He said ivermectin is among other “safe off-label drugs that they are prohibiting me from using.”

Dr. Paul Marik arrives at the courthouse with tears in his eyes. He says it’s about saving lives: https://t.co/VDd6dAwxE0 @WTKR3 pic.twitter.com/10wf1cbj8I

Sentara Healthcare, in an email to the TV station, said it “follows evidenced-based protocols as recommended by trusted agencies including CDC, NIH, and FDA.”

“All of these agencies currently do not recommend the use of Ivermectin as a treatment for COVID-19 due to a lack of evidence regarding its safety and efficacy.”

Marik acknowledged that the NIH doesn’t recommend the drug for COVID-19 treatment, but he argued that “if you look at the statement these are guidelines and not rules, and the physician needs to use his clinical judgment on how to treat the patients.

Further, as WND reported, ivermectin is featured on the NIH website as a treatment for COVID-19 that is “under evaluation.”

In fact, ivermectin is the second drug listed – under the highly touted, expensive COVID-19 drug with many side effects, remdesivir – on the NIH page, which is titled “Antiviral Agents That Are Approved or Under Evaluation for the Treatment of COVID-19.”

Marik was a co-author of a peer-reviewed study published in February by the American Journal of Therapeutics that found that ivermectin reduces coronavirus infections, hospitalizations and deaths by about 75%.

Ivermectin, in more than 30 trials around the world, causes “repeated, consistent, large magnitude improvements in clinical outcomes’ at all stages of the disease,” according to the study.

The evidence is so strong, the researchers believe, the anti-parasitic drug should become a standard therapy everywhere, hastening global recovery.

Marik said at the time that the data are “overwhelming.”

“We are in a pandemic, and this is an incredibly effective way to combat it,” he said. “If we use ivermectin widely, our societies can open up.”

Marik is a founding member of the Front Line COVID-19 Critical Care Alliance (FLCCC), a team of doctors that formed at the beginning of the pandemic to develop protocols to treat COVID-19 patients.

He developed a protocol to treat septic shock that became the basis for a COVID-19 treatment developed by FLCCC co-founder Dr. Pierre Kory, who testified of its effectiveness to a U.S. Senate committee.

Ivermectin is approved by the FDA for other treatments and has been successfully used off-label for COVID-19 patients. From 10% to 20% of all prescribed drugs are used off-label. Ivermectin has been shown to be effective as a preventative and early- and late-stage treatment in 130 studies, with 84 peer-reviewed, including 66 with results comparing treatment and control groups. Studies have demonstrated its ability to inhibit the replication of SARS-CoV-2 as well as its strong anti-inflammatory properties.

But many pharmacists and doctors, along with Marik, have disclosed that health-care management is barring them from prescribing ivermectin. And the drug recently was the target of a media and government disinformation campaign, dismissing it disingenuously as “horse dewormer.” The FDA’s official Twitter account posted a caption above a photo of a horse: “You are not a horse. You are not a cow. Seriously, y’all. Stop it.”

NIH points out on its “antiviral agents” page that among the serious side effects seen in patients who take remdesivir are severe renal failure and liver damage. Ivermectin, on the other hand, is “generally well tolerated.” The World Health Organization, in November 2020, recommended against the use of remdesivir in hospitalized COVID-19 patients. The WHO said at the time that there was “no evidence that remdesivir improves survival and other outcomes in these patients.”

Meanwhile, ivermectin, whose inventors won a Nobel Prize, has a better safety record than several vitamins, with an average of only 160 adverse events reported every year. It has been safely administered several billion times around the world, virtually eradicating diseases such as river blindness in Africa.

The ivermectin side effects observed, according to the NIH, include “dizziness”; “pruritis,” which is an irritating sensation that creates an urge to scratch; nausea and diarrhea. The NIH said unspecified “neurological” adverse effects have been seen in the treatment of parasitic disease, but it’s unclear if they are connected to the drug or to the underlying conditions.

In September, more than 8,600 scientists and physicians from around the world signed a declaration condemning public policy makers of “crimes against humanity” for restricting life-saving treatments such as ivermectin and hydroxychloroquine while quashing debate and scientific inquiry.