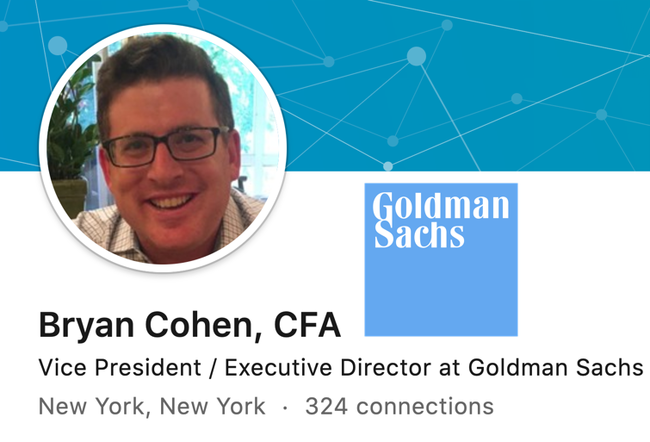 Goldman Sachs has avoided staying out of the insider trading spotlight for about a year. But on Friday, new court documents reveal that an investment banker at the firm’s New York branch was arrested for his alleged involvement in an insider trading scheme that generated $2.6 million in illicit profits, according to Bloomberg.

Bryan Cohen, a vice president at Goldman, was arrested Friday by the Feds for leaking “nonpublic information concerning impending corporate transactions” over a three year period in exchange for cash and gifts, stated the US Securities and Exchange Commission (SEC) in a formal complaint via the US District Court Southern District of New York.

The insider trading scheme realized $2.6 million in illicit gains were tied to at least two different companies, including a possible takeover deal that sent Syngenta soaring in 2015, and Arby’s 2017 takeover of Buffalo Wild Wings.

“Throughout that period, Cohen, who was employed at a large international bank (“Investment Bank A”) carried out the scheme by misappropriating from his employer material nonpublic information concerning impending corporate transactions,” court documents read.

The SEC alleges that Cohen shared the nonpublic information with George Nikas, an NYC restaurateur who owns GRK Fresh with three locations in Manhattan, was also charged by federal prosecutors for making the trades.

In exchange for making the trades, the SEC alleges that Nikas paid out Cohen “a share of the profits and/or other benefits.”

News of the insider trading scheme at Goldman broke on Saturday morning. The investment bank also saw two employees in 2018 charged by the SEC for similar schemes.

Last May, Woojae “Steve” Jung, a Goldman TMT Vice President, was charged with securities fraud for using inside information about the investment bank’s clients to make $140,000 in illicit profits on 12 deals, while using a co-conspirator in South Korea to execute the trades.

In August last year, a former Goldman analyst leaked nonpublic information about upcoming mergers to NFL star Mychal Kendricks. The SEC has since charged them both.

Cohen’s LinkedIn profile shows he worked as an analyst at ABN AMRO and RBS, then transitioned to the investment bank side in the last seven years at Barclays (2013 to 2014) and Goldman Sachs (since 2014).

There’s no indication via LinkedIn that Cohen has been fired from Goldman. Bloomberg notes that he’s been placed on leave, which means he’ll be fired in the coming weeks.