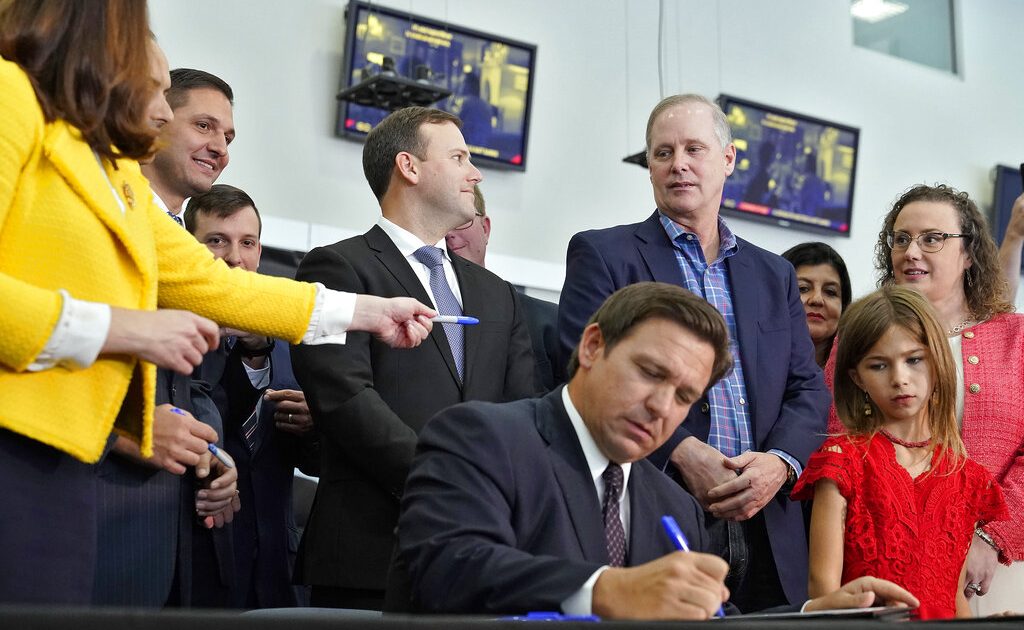 Florida Gov. Ron DeSantis, seated, signs a bill in front of supporters and members of the media during a news conference Thursday, Nov. 18, 2021, in Brandon, Fla. (AP Photo/Chris O’Meara)

Florida Gov. Ron DeSantis (R) recently signed multiple bills limiting the ability of employers in the state to force vaccines on their workers. Speaking from Brandon, Florida on Thursday, DeSantis said this is the “strongest pro-freedom, anti-action taken by any state.”

The four bills were passed through the Florida state legislature in a special session on Wednesday. They made it illegal for a private employer to impose a vaccine mandate without providing medical or religious exemptions, and options for weekly testing.

During the signing, DeSantis rallied against local governments who have tried to impose their own COVID restrictions.

“I told Floridians that we would protect their jobs, and today, we made that the law,” DeSantis said.

Florida is protecting the rights of employees and families.

The free state of Florida will stand in the way of bureaucrats who want to take away our jobs and freedom through heavy-handed mandates. pic.twitter.com/Owzn2zMDdZ

“Now, some people say ‘hey, these local governments wanted to lock down businesses, they wanted to force mandates, they wanted to keep the kids locked out of school’. You’re damn right I overruled them in that because they were wrong,” DeSantis announced.

In the meantime, Florida is part of an ongoing lawsuit against the Biden administration over its OSHA vaccine mandate, which has been put on hold pending the ongoing litigation.