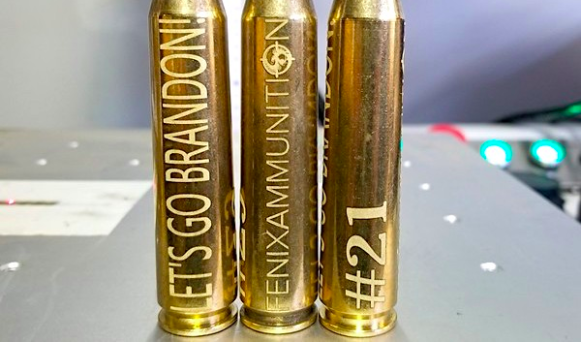 The owner of a store near Detroit is selling ammunition engraved with the words “Let’s Go Brandon,” and he isn’t too fond of the media coverage he’s receiving.

Justin Nazaroff, chief executive of Fenix Ammunition in Novi, Michigan, was the subject of a Tuesday article in the Detroit Metro Times covering his store’s inventory. Nazaroff is currently selling previously-fired .50-caliber bullet cases with the words “Let’s Go Brandon” etched into the metal.

Nazaroff mocked the media’s coverage of his inventory, saying the bullets were harmless trinkets and dismissed notions that the ammunition’s message could be construed to be offensive or threatening.

“I’m not a humorless loser, and it’s not my responsibility to be concerned about the opinions of ignorant people who spend too much time reading the Metro Times, cowering in their homes, awaiting their fifth booster shot,” Nazaroff told the Metro Times.

The phrase “Let’s Go Brandon” originated in early October during a television broadcast of a NASCAR race, in which reporter Kelli Stavast attempted to cover up the crowd’s “F*** Joe Biden” chants by claiming that they were chanting “Let’s Go, Brandon” in support of driver Brandon Brown.

When reached for comment, Nazaroff stressed the importance of citizens being able to express political messages.

“It’s not offensive to criticize a President especially when that President is an obvious sock puppet for corporate interests, tech monopolies, and the type of leadership that got us into wars in Iraq, Syria, Lebanon, and countless other places,” he told the Daily Caller News Foundation, adding that the “Let’s Go Brandon” message could only be considered dangerous by those who “put themselves in charge of determining what is and what is not acceptable speech.”

“This is something they can’t handle. It’s a cognitive dissonance that resonates deep within them, and as a result, they lash out in whatever manner they can,” Nazaroff said.

This story originally was published by the Daily Caller News Foundation.