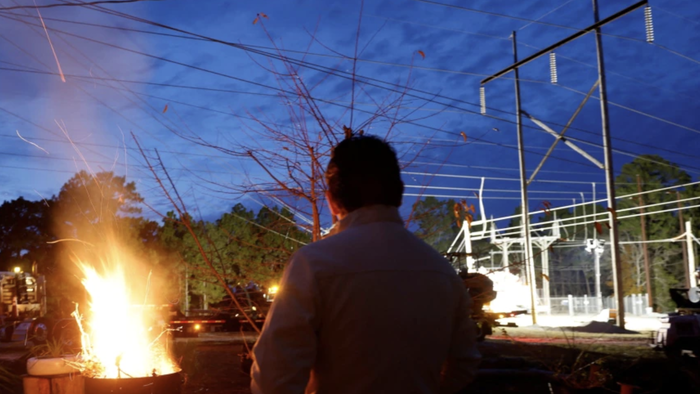 After two power substations in North Carolina came under gunfire on Saturday, tens of thousands of customers are without power. Outages are expected to last until Thursday, according to Duke Energy.

The twin attacks took place shortly after 7pm Saturday in Moore County, a rural area about 90 miles east of Charlotte. The area is popular among retirees and is home to the golf mecca of Pinehurst.

As temperatures were expected to dip to 30 degrees, more than 35,000 customers were still without power late Sunday night, according to poweroutage.us. That’s 56% of the county’s customers. Meanwhile, a Southern Pines town manager told the News & Observer that the outage has already caused several accidents, including a four-vehicle collision that sent four to a hospital with minor injuries.

A state of emergency has been declared, and along with it, a countywide curfew from 9pm to 5am. The curfew is initially slated to last through 5pm on Friday Dec 4. “It’s a very serious situation” and the curfew is needed “to protect our citizens and protect the businesses of our county,” said Moore County Sheriff Ronnie Fields at a Sunday press conference. Schools will be closed at least on Monday.

An attack like this on critical infrastructure is a serious, intentional crime and I expect state and federal authorities to thoroughly investigate and bring those responsible to justice. (2/3)

After the substations went off line, responding power crews found “extensive damage,” and “evidence at the scene indicated that firearms had been used to disable the equipment,” said Fields.

Asked if the attack seemed intended to shut down the county’s power, Fields said the perpetrators “knew exactly what they were doing.” It appears at least one gate to a substation was demolished by whoever perpetrated the attack, with a thick support pole snapped off at ground level.

“No group has stepped up to acknowledge or accept that they’re the ones that done it,” said Fields. “We’re looking at all avenues.”

Local Christian schools had voiced opposition to the event. In a letter to parents urging activism to stop the show, administrators of the Calvary Christian School said, “The LGBTQ forces are coming to Southern Pines and they are after our children…this is their target audience to peddle their abomination.”

To dampen the controversy, organizers changed the minimum attendance age to 18. Police erected barricades and both some 50 protesters and a number of counter-protesters gathered near the theater.

Hosted by “Naomi Dix” from “Durham’s House of Coxx,” the show was scheduled to start at 7pm — about the same time the attacks did. It was underway when power to the theater died.

Performers briefly continued — singing a cappella and lit by cell phones in what the organizer of the event called “a beautiful moment” — before the event managers realized the scale of the outage and cancelled the remainder of the show.

After the outage, an opponent of the show, Emily Grace Rainey, posted on Facebook “The power is out in Moore County and I know why.” Later, she wrote that she was sorry to have wasted the time of police who questioned her about her comment. “I told them that God works in mysterious ways and is responsible for the outage. I used the opportunity to tell them about the immoral drag show and the blasphemies screamed by its supporters.”

One trans activist and writer went so far as to accuse specific organizations of conducting the attack:

This is where we are at now. Proud Boys, Patriot Front, and right wing militias are shutting down drag shows and cutting power to entire towns in order to enact anti-LGBTQ+ hate and terrorism. https://t.co/UNTFiQNMla

Asked about the drag show speculation, Sheriff Fields said he wasn’t aware of a connection. “Is it possible? Yes, anything is possible, but we’ve not been able to tie anything back to the drag show.”

The sheriffs office has coordinated additional, around-the-clock security at the county’s substations as well as businesses. The FBI is assisting the investigation.

At Sunday’s press conference, Duke Energy spokesman Jeff Brooks said the attack damaged “multiple pieces of equipment in the substations. ..Unlike perhaps a storm, where you can reroute power somewhere else, that was not an option in this case, so repair has to be completed. In many cases some of that equipment will have to be replaced.”

“We are looking at a pretty sophisticated repair with some fairly large equipment…and so we do want citizens…to be prepared that that this will be a multi-day restoration for most customers, extending potentially as long as Thursday,” added Brooks.

Authorities haven’t provided any additional details, such as the type of firearm(s) used, the estimated number of rounds fired at the equipment, or the time that elapsed between the two stations going offline. Asked for more information, Fields said he didn’t want to release information that could jeopardize the investigation.

The fact that mere small arms fire can cause such a widespread and lasting loss of power should serve as a reminder to enhance your preparation for disaster.