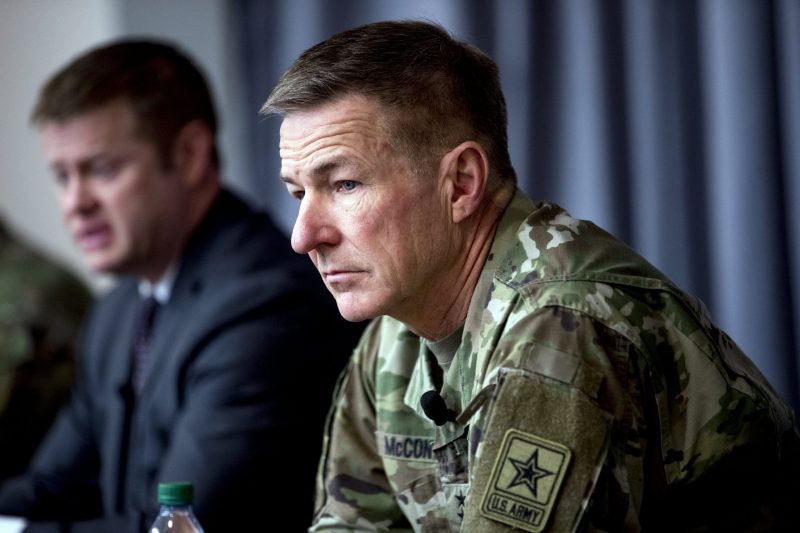 FILE – In this March 19, 2020, file photo Secretary of the Army Ryan McCarthy, left, accompanied by Gen. James McConville, Army chief of staff, right, speaks at a news conference at U.S. Army Medical Research and Development Command at Fort Detrick in Frederick, Md. Military suicides have increased by as much as 20% this year compared to the same period last year. (AP Photo/Andrew Harnik, File)

Men’s Mental Health Month puts a spotlight on mental healthcare in a demographic which it’s often ignored. According to Mental Health America, men die by suicide 4x higher than women and are often told to “man up” or bottle their emotions. Culturally, American men are looked at as the breadwinners of their families, which some claim is an immense responsibility.

“Too many men feel pressure to stay quiet about mental health,” said Katie Dolieslager with the Arrow Project. “Many of the men I’ve worked with don’t know where to find help or they were coping alone.”

Their has been a lot of pressure on men to be unwavering and to provide financially for their families over the years. That type of responsibility can create high levels of stress and anxiety. On top of that, men may have a genetic predisposition to mental health issues, or they may experience trauma from work or military experiences.

“It has to do with men just culturally being kind of taught and brought up to hold things in,” stated Chris Mason, Board Member with National Alliance on Mental Illness (NAMI) of the Central Shenandoah Valley.

This month is men’s mental health month, big shoutout to all men who have been going through a lot alone because they can’t share their problems with anyone since men were taught to “man up” rather than “speak up”. You’re strong. I respect you.

Experts said proper sleep habits, nutrition, physical activity and stress management are all key contributors to a sound mind. More than six million men are estimated to suffer from depression every year nationwide. As time goes on, there will likely be more space for men to express feelings openly without backlash.

“If we get it out where men can say, You know what? It’s OK to speak with someone, we will will be ok,” voiced professor Danny Burgess.  “That seeing someone doesn’t mean you’re crazy or weak, or any of the things. The stigma labels that sometimes. Then maybe we can intervene at an earlier point to not get to that point where they’re considering suicide and attempting with very lethal means.”

Officials are now looking to break the stigma around mental health treatment.