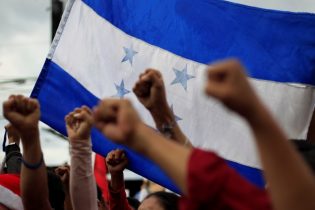 By Gabriel Stargardter and Gustavo Palencia

TEGUCIGALPA (Reuters) – Honduran police fired tear gas at rock-hurling protesters on Thursday after a widely criticized presidential election that has still to produce a clear winner stretched into its fourth day of vote counting.

Both President Juan Orlando Hernandez and his rival Salvador Nasralla, a television game show host allied with leftists, claimed victory after Sunday’s election. The vote tally at first favored Nasralla, but then swung in favor of the incumbent after hold-ups in the count, fueling talk of irregularities.

International concern has grown about the crisis in the Central American nation, which in 2009 saw a military-backed coup. The delays have already sparked unrest, and observers fear they could risk undermining the eventual winner’s legitimacy.

One of the four magistrates on the Honduran electoral tribunal flagged “serious doubts” about the process on Thursday.

Marcos Ramiro Lobo called for an independent external auditor to review the results, but was non-committal on whether there was evidence of electoral fraud.

“We can’t be sure of one thing or the other,” Lobo told Reuters, expressing concern about the vote count breaking down. “What I do know is that serious doubts are being raised.”

David Matamoros, who chairs the electoral tribunal, said he expected the count to conclude by mid-afternoon on Thursday.

The tribunal’s latest tally showed that with 92.62 percent of ballots counted, the center-right Hernandez had secured 42.92 percent of the vote, with Nasralla on 41.43 percent.

The Organization of American States (OAS) appeared to have salvaged the credibility of the election on Wednesday by eliciting signed statements from both candidates that vowed to respect the final result once disputed votes had been checked.

But a few hours later, Nasralla rejected the accord he had signed, saying his opponents were trying to rob him. He urged supporters to take to the streets of capital Tegucigalpa to defend his triumph.

“They take us for idiots and want to steal our victory,” said Nasralla, who heads a left-right coalition.

Nasralla is one of Honduras’ best-known faces and is backed by former President Manuel Zelaya, a leftist who was ousted in the 2009 coup after he proposed a referendum on his re-election.

On Thursday, Nasralla’s coalition released a statement signed by Zelaya. Zelaya asked for more transparency in the vote count, and said the coalition could not currently accept any decision issued by the tribunal.

Nasralla’s followers heeded his call, with protests throughout the country on Thursday. At least two protesters and two police were injured in the capital, with one of the protesters shot in the leg, emergency services said.

With the stinging stench of purple-hued tear gas filling the air, dozens of youths shielded themselves with corrugated iron panels as they battled with Honduran security forces, who were guarding a vote-count center in Tegucigalpa.

“We’re going to keep protesting and won’t let them steal this victory,” 20-year-old university student Josue Valladares said, as votes were being counted on the other side of a human wall of riot police.

The sporadic way in which results have been published, and the reversal of Nasralla’s lead, have led the opposition to allege that Hernandez may have influenced the tribunal. Hernandez denies that.

In a statement on Thursday, the OAS urged the election tribunal to process all of the ballots before declaring a winner, as did European Union election monitor chief Marisa Matias.

“We want a result that is going to be cast-iron and stand up to full scrutiny … and that people have full confidence in,” a senior diplomat told Reuters, speaking on condition of anonymity. “If that does take a bit longer to achieve, so be it.”

On Monday, the tribunal published more than half the results, showing Nasralla with a five point lead, but then published nothing more for 36 hours.

When the count finally started again, Hernandez began to reel in Nasralla. The count has started and stopped ever since, with the tribunal blaming a five-hour delay on Wednesday on computer glitches.

Ahead of the election, opinion polls indicated that Hernandez was favored to win the vote in the poor Central American country of more than 9 million people.

He is the first president to seek a second term since a 1982 return to democracy in Honduras, which also suffers from drug gangs and one of the world’s highest murder rates.