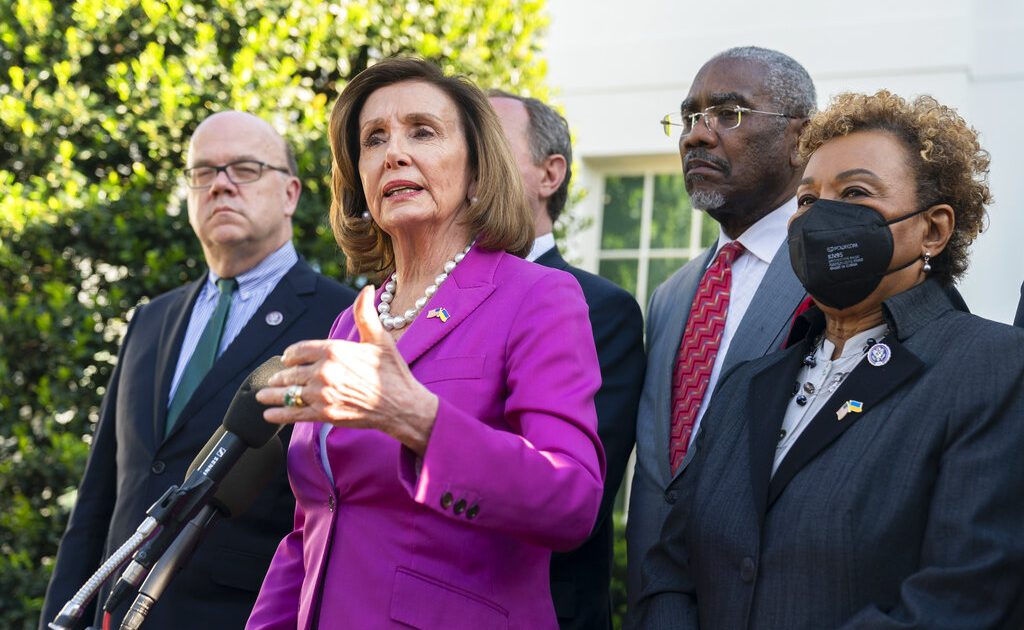 House Speaker Nancy Pelosi of Calif., with Rep. James McGovern, D-Mass., left to right, Rep. Greg Meeks, D-N.Y. and Rep. Barbara Lee, D-Calif., and other members of the Congressional delegation that recently visited Ukraine, speaks to reporters outside the West Wing of the White House following a meeting with President Joe Biden, Tuesday, May 10, 2022, in Washington. (AP Photo/Manuel Balce Ceneta)

The House of Representatives moved forward a $40 billion Ukraine military aid package. The lower chamber passed the legislation in a 368-to-57 vote on Tuesday, just hours after the bill’s official text was released. All 57 opponents of the spending spree were Republicans.

House Speaker Nancy Pelosi (D-Calif.) praised the bill’s passing as a monumental for a crisis that has raged for the past three months.

“We should all be very proud that we had the opportunity when (Vladimir) Putin decided whatever it is he decided, to be brutal and cruel and a coward, that we were there to help,” stated the top Democrat. “It’s about democracy versus a dictatorship.”

The aid is supposedly split evenly between military and humanitarian efforts with billions of dollars going towards training Ukrainian troops, replenishing weapons stores, propping up the Ukrainian economy and aiding refugees in the US.

The bill is $7 billion more than President Joe Biden’s initial request and will put the American aid to Ukraine up to $54 billion since the war first began. With its passing, Rep. Rosa DeLauro (D-Conn.) claimed the latest push will bring the crisis closer to a conclusion.

“This bill ensures that we are one step closer to making them pay the full price for their actions,” she stated. “And in the process, we will be standing firmly with the Ukrainian people while combating the exploitation of Ukraine’s vulnerable financial system.”

Biden and the Democrat Party initially wanted to tie the package in with additional funding to combat COVID. However, Senate Minority Leader Mitch McConnell (R-K.Y.) had pledged to stand in the way of the bill’s passage unless COVID relief funds were dropped.

I got to meet with Ukrainian Ambassador Markarova to discuss Ukraine’s brave fight. Our brave friends are nowhere near out of the woods yet. Continued U.S. assistance must move at the speed of relevance to help Ukraine defeat the invaders and win this war. pic.twitter.com/TMgwNh4pyu

The measure now heads to the Senate with Majority Leader Chuck Schumer (D-N.Y.) saying they will “move swiftly” to pass it.