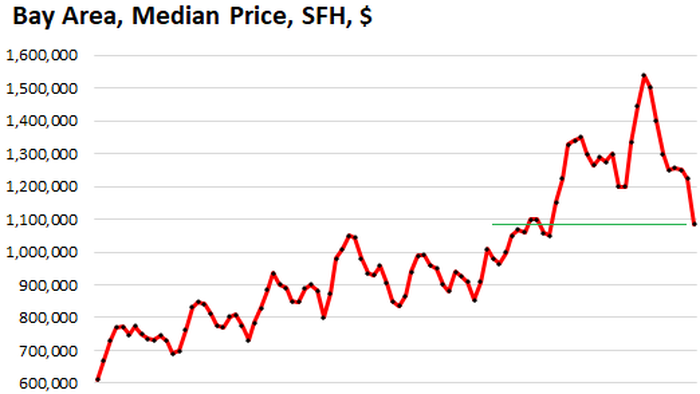 Authored by Wolf Richter via WolfStreet.com,

Home prices for all of California are down, Southern California too is getting hit, even San Diego, but the Bay Area is the standout in terms of the steep and deep plunge in prices.

Sales of single-family houses plunged by 37% year-over-year in the Bay Area. But in Southern California, where price declines haven’t been that huge yet, sales collapsed by 48%. In all of California, sales plunged 44%, to 240,000 homes, just a hair higher than during the bottom of Housing Bust 1 in late 2007.

The median price of single-family houses in the San Francisco Bay area plunged by 30% in December from the crazy peak in March 2022, by nearly $455,000, from $1.54 million to $1.08 million in nine months, according to the California Association of Realtors today.  The plunge in December – after months of layoff announcements by big and small companies in the area – was particularly brutal.

That this 30% plunge from peak only put the median price back roughly where it had been in December 2020 shows how crazy the price spike had been during the free-money pandemic. But not many people bought a house during these two years. So in essence, this 30% plunge isn’t a big deal in the overall scheme of things.

But for people who used to look on Zillow constantly to see how much richer they have gotten by just living there, well, they might have to stop looking. Problem solved – unless they want to sell.

Some caveats here about median prices: They’re volatile and they’re seasonal, and they can get skewed by the mix of what actually sells, etc. etc. But in a huge market like this – the nine-county Bay Area has a population of around 7.6 million people – the median price is a reasonably reliable indicator of the direction and magnitude of price changes.

Seasonally, January is the low point for median prices in the Bay Area. So one more month to go. Then the spring selling season normally shows up when demand normally perks up prices. But this may not be a normal year.

Where is this demand supposed to come from? Who is going to buy at these prices, with layoff announcements spreading across the area on a daily basis, and with stock prices of local companies (stock-based compensation plans) and cryptos getting demolished? Who will have the desperation to buy at these still sky-high prices? At what prices will the buyers come out of the woodwork? That will be put to the test over the next few months.

The five big counties of the Bay Area.

Condos are a big part of the City, including numerous fairly new towers South of Market, where sales have collapsed, as the tech companies headquartered in the area, including Twitter and Salesforce, have announced a gazillion layoffs. Year-over-year, condo prices have plunged 23%.

Everyone can figure that January is going to be bad. So now all eyes are on the upcoming spring selling season, amid this constant drum beat of layoffs at companies headquartered in the area, or with large operations in the area. Beyond the actual layoffs, the layoff announcements also create a lot of uncertainty among people who haven’t been laid off yet. And that can’t be a good motivator to go out on a limb and buy a still ridiculously overpriced home.

Enjoy reading WOLF STREET and want to support it? You can donate. I appreciate it immensely.