How To Kill A Zombie? Positive Real Yields Leave Record Number Of Biotechs Trading Below Cash 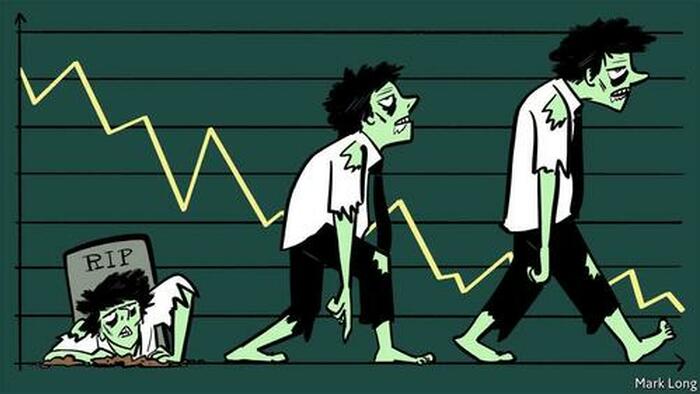 An aggressive, hawkish, and behind the curve Federal Reserve unleashed the most significant rate hike since the Dot-Com bubble burst in the early 2000s. The oversized 50bps hike was in response to inflation at four-decade highs. The Fed is expected to ‘taper’ its balance sheet at the beginning of June, and all of this hawkishness has crushed the valuations of profitless companies.

The Fed telegraphed its move to embark on the hiking cycle late last year from emergency levels. The market’s consensus forecast of rate hikes for 2022 increased from 50bps in November to 235bps in May as the Fed is on the path to finding the neutral rate by the end of the year to slow inflation.

More importantly, real yields jumped into positive territory for the rest time in two years. However, the move didn’t happen overnight and began in November.

Once deeply in negative territory, the dynamic helped divert money from U.S. government bonds into risky stocks, such as profitless companies like biotech. This has since reversed.

Anticipation of tighter monetary policy pushed real yields positive and has re-rated risky companies, evident in the fact that over 20% of the Nasdaq Biotechnology Index’s 370 members – a record by a long way – are now trading less than cash.

It seems, the world’s freshly schizophrenic central bank hawks have finally figured out how to kill zombies. As we detailed recently, Zombies were introduced to the economic jargon by Ricardo Caballero, Takeo Hoshi, and Anil Kashyap in their article, “Zombie lending and depressed restructuring in Japan” in 2008, where they named the unprofitable and indebted yet still operating firms in Japan as “zombie companies.” They found that, after the financial crash of the early 1990s, large Japanese banks kept money flowing to otherwise insolvent borrowers, aka zombies.

What happens, when money (credit) is abundantly and easily available? Unprofitable firms that should fail start to roll-over their debts and seek easy funding to carry on. This is what happened after central banks enacted their ‘extreme’ monetary measures in the 2010’s. They started to create zombie companies, like ailing Japanese banks did in the 1990’s.

Zombie companies are a menace to the economy, because they restrict the entry of new, more productive companies, diminish job creation in the economy and lock capital to unproductive use. Zombie companies seek to survive, not to thrive. They hoard money and debt, but do not invest. Workers may keep their jobs, but they are locked in unprofitable production.

According to research by Natixis, a French bank, the share of zombie corporations in Europe had risen to 21 percent by the end of 2019. Now, due to the “corona bailouts,” the share is likely to be considerably higher. According to the data compiled by Deutsche Bank Securities, the number of U.S. publicly traded companies classified as zombies had risen to close to 19 percent by the end of 2020. According to Bloomberg, in November 2020, U.S. zombie corporations sat on an incomprehensibly large mountain of $2 trillion in debt. The number of publicly listed zombie companies had also swollen by 200 since the start of the pandemic. This is a clear example of how government and central bank induced bailouts make the economy more fragile.

Alas, central banks, especially the Federal Reserve and the European Central Bank have fed the creation of zombie companies for years through ultra-low interest rates and QE programs.

Zombies should not exist in the real world, and the real world is about catching up with the “zombified” global corporate sector. With the drastically hastening inflation forcing the hand of central bankers to raise rates aggressively in the coming months, we are heading into a flood of corporate bankruptcies.

At the same time, the TINA (there is not alternative) narrative has died with Treasuries now offering ‘safer’, higher-yielding alternatives for increasingly anxious investors (despite the worst ever start to a year for bonds)…

However, it gets worse, as Paul Tudor Jones recently warned, piling headlong into bonds may not be the wisest choice, as he notes that we are now in “uncharted territory”.

Specifically, PTJ warned investors to prioritize capital preservation in such a challenging environment for “virtually anything.”

“I think we’re in one of those very difficult periods where simply capital preservation is I think the most important thing we can strive for,” Jones said.

“I don’t know if it’s going to be one of those periods where you’re actually trying to make money.”

As he summarized: “You can’t think of a worse environment than where we are right now for financial assets.”

And perhaps the signals from the riskiest of risky lottery ticket stocks – Biotechs – is one more sign of that risk-tolerating, zombie-embracing behavior being abandoned.