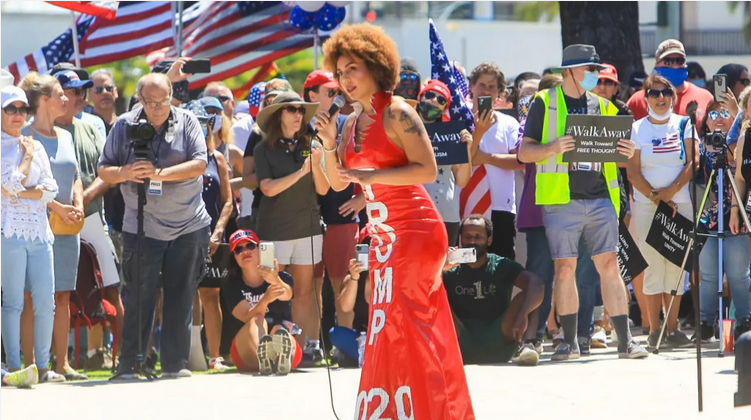 Police said the rally was a peaceful protest and no arrests were made.

Hundreds of demonstrators attended the “Rescue America” rally in Beverly Hills on Saturday afternoon. The pro-Trump march was organized by the #WalkAway Foundation, a campaign that “encourages and supports those on the Left to walk away from the divisive tenets endorsed and mandated by the Democratic Party of today.”

“We’re doing these rallies because we wanted to show the radical left who’s been smashing windows, committing acts of violence, committing acts of vandalism they do not own America’s streets,” Brandon Starka, the founder of #WalkAway, said on Saturday. “We’re going to fight for the heart and soul of America, so this is our third one. Next week we’ll be in Milwaukee and we’ll basically be doing ‘Rescue America’ rallies around the country for now through the end of the year.”

Singer Joy Villa, who famously stunned many when she wore a pro-Trump dress that said “Make America Great Again” to the 2017 Grammy Awards, was one of the speakers at the “Rescue America” rally. Other notable attendees include actors Scott Baio and Lorenzo Lamas.

The Beverly Hills Police Department said the rally was a peaceful protest and no arrests were made. There were a few counter-protesters, including a Black Lives Matter supporter who made the mistake of approaching political commentator Shemeka Michelle.

Another #WalkAway supporter, who calls herself “RedPill Rage,” said that she isn’t black, but defined herself as an “American” instead.

The #WalkAway organization says its members are leaving the Democratic Party.