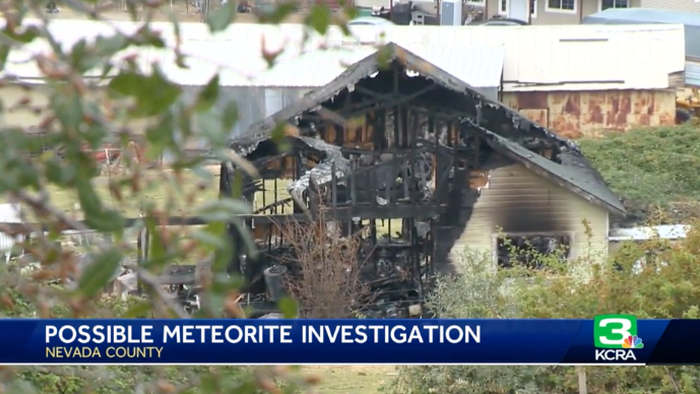 On Friday, dozens of people across Northern California witnessed a bright ball of light tumbling from the night sky. Several captured the phenomenon on camera, while one man believes the final destination of that bright light, which could be a meteorite, destroyed his home.

Procita said after that loud noise, he “started to smell smoke. I went onto my porch and it was completely engulfed in flames.”

Bandur spoke with Josh Miller, captain of Penn Valley Fire Department, who said a call came in around 7:30 pm local time for a structure fire. It took firefighters several hours to combat the flames.

Friday at 7:26 pm, CAL FIRE responded with Penn Valley FPD to a Residential Structure Fire near Lake Englebright. E2354 arrived first reporting a well involved trailer and vehicle, with no threat to vegetation. The fire was contained, committing resources for approx. 4 hours. pic.twitter.com/WPfjtZcLj8

“It appears the bright ball of light captured on car and home videos landed in the middle of nowhere. Procita believes it was a meteor that landed on his house,” Bandur said.

Anyone else just see this crazy flash light up the sky? Captured by my dashcam in El Dorado Hills, CA. pic.twitter.com/4BlzOB5ISD

Miller told the reporter: “Everyone I talked to said it was a flaming ball falling from the sky and landed in that general area” of Procita’s home. He said those who observed the fireball in the night sky tracked it to the incident area.

“I had one individual tell me about it first and I put it in the back of my mind but then more people — 2, 3, 4 — started coming in and talking about it,” he said.

At the same time, the Southern Taurids meteor shower was at its peak in the region. Miller said it could take at least a week or more to determine the cause of the fire.

Wonder if the homeowner has meteorite insurance?