Illinois Has Created No Net New Jobs In 20 Years 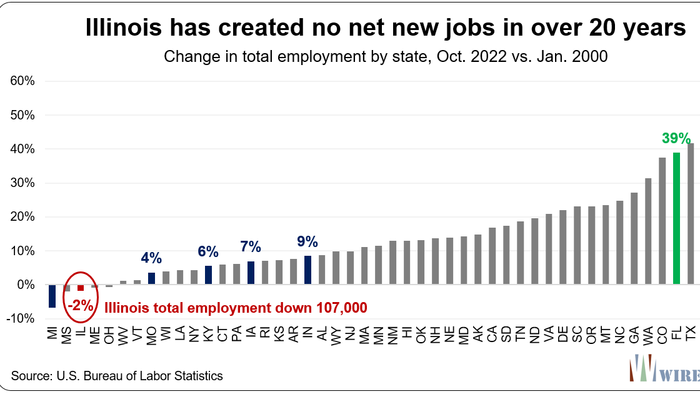 Authored by Ted Dabrowski and John Klingner via Wirepoints.org,

Illinois has many deep, structural issues that continue to be ignored by those in power. Among them is one that impacts people’s lives deeply – Illinois’ lack of job creation.

A Wirepoints review of employment growth across the 50 states shows Illinois’ economy hasn’t created any net new employment in more than 20 years. In fact, Illinois has lost 106,697 net jobs since 2000, according to U.S. Bureau of Labor Statistics data.

Those job losses put Illinois third-last in the country when comparing employment in 2022 vs. employment in 2000. Only Michigan, which suffered massive auto industry losses during the Great Recession, and Mississippi fared worse than Illinois.

In contrast, a state like Florida grew its employment rolls by 2.9 million, or 40 percent. Texas has grown employment by over 4 million, the most in the country.

Illinois stands out even among its neighbors, which many might expect to fare poorly as Midwestern states. But aside from Michigan, all created jobs. Missouri, Wisconsin, Kentucky and Iowa all increased employment by more than 100,000 each. Indiana led Illinois’ neighbors with an increase in employment of more than 250,000, or a growth of 9 percent.

Compared to the nation’s five largest states (Illinois only recently fell to the 6th-largest state in the country), Illinois’ problems stand out even more. Struggling states like New York and Pennsylvania managed to increase employment by 4 to 6 percent since 2000.

Texas and Florida, meanwhile, blow everyone else out of the water with employment growth of around 40 percent. Their stellar numbers are a function of their focus on pro-business, pro-growth policies.

Employment growth in the short term

With Gov. Pritzker’s big win this November, it’s worthwhile to see how well employment has fared under his tenure. As the numbers show, the negative has trend continued.

Illinois failed to create any net new jobs and in fact employment is down by 156,000 compared to when the governor took office in January 2019.

Illinois ranks 44th in the nation with worse numbers than all of its neighbors – including Michigan.

A problem of jobs

Wirepoints recently reported that Illinois’ unemployment rate was the nation’s highest for the second month in a row in October. Compared to Illinois’ 4.6 percent rate, all of its neighbors are faring far better – most notably Wisconsin, Indiana, Iowa and Missouri where unemployment rates are 1 to 2 percentage points lower.

Illinois’ status as the extreme outlier in unemployment makes sense considering just how poor it’s been at creating employment over the last several years and even decades.