Clerk of the House Cheryl Johnson, left, and House Sergeant at Arms Paul Irving pass through Statuary Hall at the Capitol to deliver the articles of impeachment against President Donald Trump to the Senate, on Capitol Hill in Washington, Wednesday, Jan. 15, 2020. (AP Photo/J. Scott Applewhite)

This came after Pelosi waited weeks to transfer the articles and move onto the next phase of the process.

“Today, we will make history when the managers walk down the hallway, across a threshold in history, delivering articles of impeachment against the President of the United States for abuse of power and obstruction of the House,” she said.

#WATCH: House impeachment managers walk the articles of impeachment through the Capitol to the Senate. pic.twitter.com/g05gQKd9mM

The articles will be formally read and presented to the Senate on Thursday. Chief Justice John Roberts will then be sworn in and to proceed to swear in all 100 members of the Senate.

Proceedings are expected to begin on Tuesday.

RELATED: Chief Justice Roberts To Swear In Senators In Impeachment Trial This Week 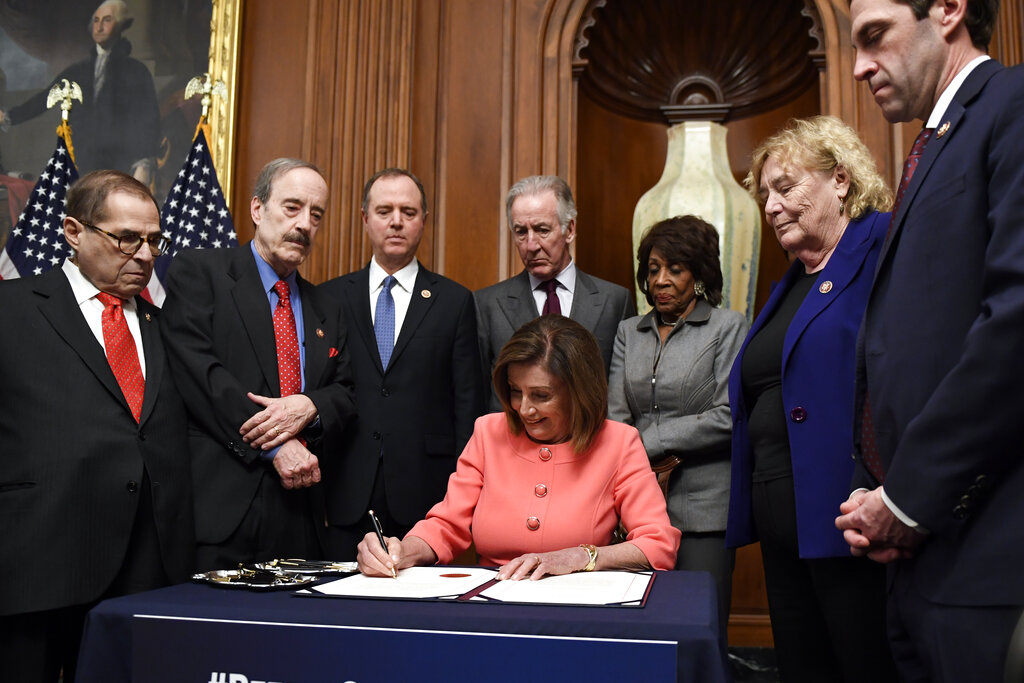 House Speaker Nancy Pelosi of Calif., signs the resolution to transmit the two articles of impeachment against President Donald Trump to the Senate for trial on Capitol Hill in Washington, Wednesday, Jan. 15, 2020. (AP Photo/Susan Walsh)

White House officials are bracing for a “quick” trial in the Senate and said they don’t expect new witness testimonies. Top administration officials believe President Trump is overwhelmingly winning in the impeachment case. They also expect the trial to last no more than two weeks.

White House Deputy Press Secretary Hogan Gidley said the president is not worried about the trial and believes Democrats’ case for impeachment is blatantly political.

“The whole process has been proven, to this point, to be a sham and illegitimate. The president has done nothing wrong. The articles of impeachment don’t even allege a crime. The president is focused on doing his job, focused on making the lives of all Americans better. Nancy Pelosi and the Democrats are focused on their own selfish political desires.” 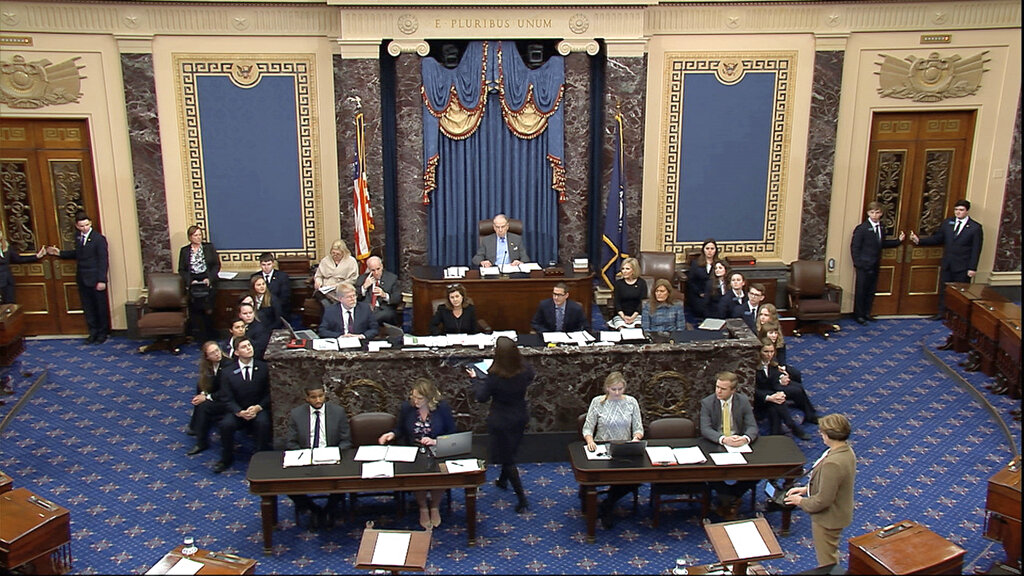 In this image from video, Secretary of the Senate Julie Adams, front center, carries the articles of impeachment against President Donald Trump after they were delivered from the House of Representatives at the Capitol in Washington, Wednesday, Jan. 15, 2020. (Senate Television via AP)

Senators will reportedly vote on having witnesses in the impeachment trial, but not on promptly dismissing the House’s articles of impeachment. Wednesday reports, which cited GOP senators, said an organizing resolution for the trial will mandate senators debate and vote on a motion to subpoena additional witnesses.

GOP Sen. Lamar Alexander said the measure guarantees a vote on witnesses after arguments from both sides. The resolution does not call for a vote to immediately dismiss the articles of impeachment, which is an idea President Trump has previously expressed interest in.