In the Aftermath of the Rittenhouse Trial, the Activist Left Shows Its True Colors 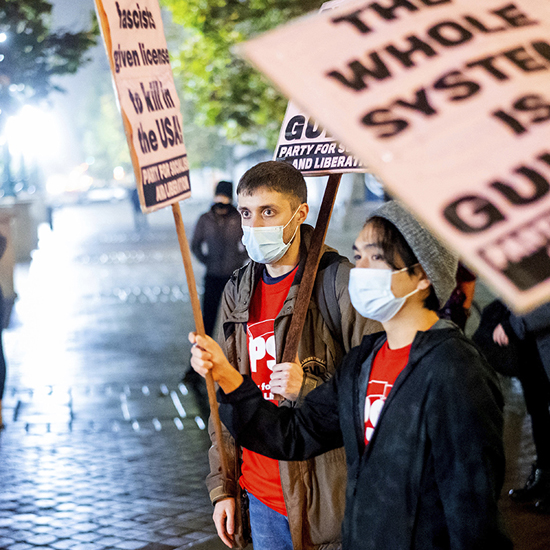 The country was braced for an eruption of violent protests and rioting in the many urban areas after the not guilty verdict in the trial of Kyle Rittenhouse. But aside from a full-on show of arrogance from the uninformed social media warriors, the street actions of those who wanted a guilty verdict paled in comparison to last summer’s unrest.

Protests flared up in several US cities after a jury acquitted Kyle Rittenhouse of all charges in connection with the shooting of three individuals who attacked him during BLM riots last year in Kenosha.

Activists took to the streets in Chicago, New York City, Oakland, Portland, and a few other cities to protest the verdict, but in dramatically smaller numbers than during last summer’s riots.

While the typical hotbeds of intolerant street protests and anarchic violence saw their usual suspect protesters, even in those locations the violence was muted, and the crowds were small.

Even the streets surrounding the courthouse in Kenosha where the trial was held failed to erupt into pitched protest. After the verdict, most of the protesters melted away from the courthouse. One eight-person pod carried an anti-Rittenhouse banner, but they failed to garner support and the effort quickly ended.

An organized rally is scheduled in Kenosha for Sunday, but at this point, the possibility of violent protest is diminishing by the hour.

So, the question is this. How is it that with the elevated level of race-identity politics played today, with the Fascist Left pushing the false narrative of “White privilege” through the revisionist history of initiatives like the 1619 Project and the pure Marxism of Critical Race Theory, how is it that the not-guilty verdict in the Rittenhouse case didn’t ignite street violence and huge numbers of protesters in the streets?

Why This Is Important

The theory that the massive crowds that took to the streets in the Summer of 2020 did so out of gratuitous political activism facilitated by paid community organizers and centered on an election cannot be ignored.

It cannot be denied that Leftist activist groups received not only favorable coverage from the Left-leaning mainstream media, but also funding from the usual suspect millionaires and billionaires, all of whom prefer a globalist control of the United States and all of whom actively sought to destroy President Trump.

Even the New York Times chose to spike a story about the impact of last summer’s riots on Kenosha, Wisconsin residents and business owners until after the November General Elections.

In reporting that most of the violent protesters in the Kenosha streets last summer were “well-off young people, with little sense of how important local businesses are to their owners and communities,” Bowles said the protesters and their social media supporters held the common notion that “looting and burning down businesses for racial justice was both good and healthy.”

It is more likely, in the matter of the lack of significant protests after the Rittenhouse verdict, that the political landscape has changed. With Progressive Democrats, Fascists, and the global elite in control of the White House and Congress, the optics of having violent street protests simply doesn’t fit the narrative necessary to maintain power. There is no “Orange Man” to blame and no need for transformative political change in the immediate.

The Fascist Left needs to keep the divisive vehicles of “White privilege” and “systemic racism” alive – not to mention the accompanying boogeyman of gender bias – to deflect from their wholly Marxist and transformative agenda, especially when they have little else to show for their time in power for the 2022 Midterm Elections and the 2024 General Election.

To wit, we heard nothing about an acquittal in another “self-defense” murder case, this time involving a Black defendant who shot at law enforcement officers in Vero Beach, Florida. It can be argued that the acquittal of Andrew Coffee, a 23-year-old Black man, simply didn’t fit the narrative that centers on systemic racism in our judicial system.

Coffee was on trial for firing at Sheriff’s Deputies during an early morning drug raid at his home back in 2017. His girlfriend, Alteria Woods, was killed in the crossfire between Coffee and deputies. Coffee was charged with Wood’s murder after a grand jury exonerated law enforcement for her death.

The defense said Coffee was asleep and believed the flash-bang grenade used to initiate the raid was gunfire, so he fired his gun believing he was under attack. “I was trying to protect me and Alteria and I thought I was doing that, but I feel I didn’t protect her. I can’t sleep with that…”

So, even though Coffee shot a weapon to kill law enforcement officers and even though he and his father are “career criminal” drug dealers, the system proved not to be “systemically racist” in exonerating Coffee of the murder charge.

Which begs the question: why didn’t we hear the thumping drums of activists in response to that verdict? This question dovetails perfectly into this question. Why was the response to the Rittenhouse so muted compared to the rage protests of Summer 2020?

The answer is clear if you take off the Left’s mandated race-bait goggles. The preferred narrative in the Coffee trial wasn’t served, and there was no money being thrown at the “bought-and-paid-for” activist groups in the Rittenhouse trial. The rage politics of Summer 2020 was all manufactured for political purposes.

We have been manipulated into division by a small group of opportunistic narcissists who don’t want us to realize we all have more in common than we do in difference. That’s how they are able to maintain their power – on both sides of the aisle, through the promotion of fear and hate.

“The single biggest problem in communication is the illusion that it has taken place.” – George Bernard Shaw