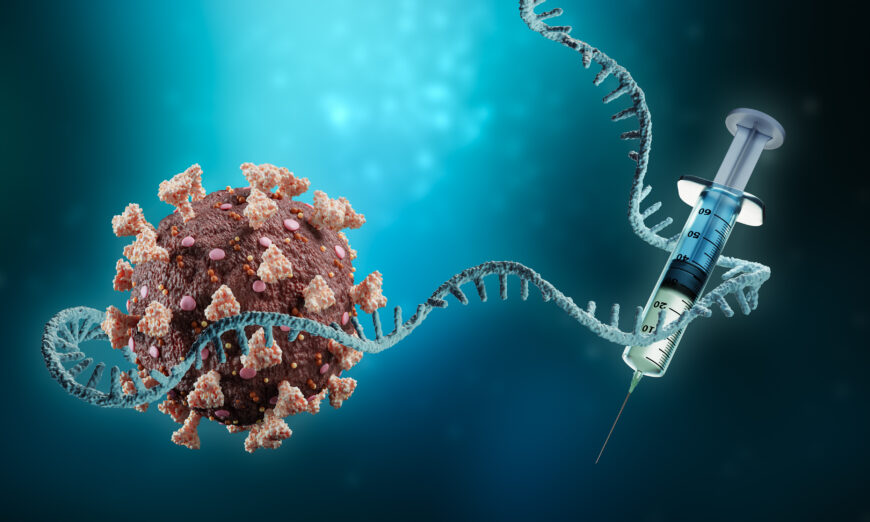 A recent preprint study has shed light on why adverse events have been observed following a COVID-19 messenger RNA (mRNA) vaccination.

The study, led by researchers from Thomas Jefferson University, found that the lipid nanoparticles (LNPs) used to transport mRNA in COVID-19 vaccines could “inhibit” and “alter” immune responses in mice.

LNPs are shells of lipids that envelope mRNA to prevent degradation and detection by our body’s immune system.

LNPs are not mRNA, simply an envelope to transport the mRNA cargo.

Both the Pfizer and Moderna mRNA COVID-19 vaccines use LNPs to deliver mRNA spike protein sequences into human cells. Once human cells received the mRNA sequences, the cells will then manufacture spike proteins, triggering an immune response.

It was originally intended that the LNPs discreetly deliver mRNA sequences into the cells to produce spike proteins, and in doing so, form immunity against the COVID-19 virus.

However, many studies in mice have since found that the LNPs, claimed to be non-toxic and safe, are actually highly inflammatory.

These nanoparticles are highly durable and can last for 20 to 30 days in the body. While they persist in the body, it is likely they will continue to activate the immune system, leading to immune exhaustion and non-responsiveness.

The Thomas Jefferson study also shared similar findings. The researchers investigated how LNPs affect the immune system by injecting mice with the same LNPs used in Pfizer’s vaccines, and some mice were even double-dosed.

Inflammation and immune responses in mice are not sure signs that the same will happen in humans. Nonetheless, mice have long been used to test for safety and efficacy in drugs for human use; signs of immune problems are an indication of possible health risks in humans.

The authors found that mice that received two doses had a reduced immune response on their second injection as compared to mice that only received one dose.

Mice that were injected with two doses of LNPs had a reduced number of innate immune cells, the first-responder immune cells.

The authors wanted to find how the LNPs, the shell that wraps around mRNA, affected mice by injecting them with different variations LNPs.

The mice were split into three groups, all three groups received two injections, albeit with different contents.

The remaining mice were given an injection of salted water. These mice are used as the baseline for comparison as salted water injections are not supposed to introduce any changes to the body.

Two weeks later, all three groups were given the same LNP injection containing mRNA sequences for an influenza protein (HA). The second injection allowed their cells to make HA proteins, which triggered an immune response. It was intended that this immune response would then make the mice immune against the influenza virus.

The researchers found that following the second injection, all mice had developed immune defense against the influenza virus.

The authors observed mice that were given two doses of LNPs were more resistant to an influenza infection as they lost less weight. Oddly enough, these same mice also had a lower immune response to the flu vaccine with fewer immune cells activated.

The authors speculated that their “resistance” is likely not from strengthened immunity, but a product from an alternative pathway triggered by LNPs. It is unknown if this “resistance” will apply to other infections and may only be applicable to influenza.

This is because the study found that mice that were more “resistant” to the flu were actually more susceptible to fungal infections.

The researchers infected mice with Candida albicans, the mice that received two doses lost more weight and had poorer control over the infection, indicating an alteration in the innate immune response.

Further investigations showed that these mice had a lower number of neutrophils, which are the most common first responder immune cells.

The job of neutrophils is to patrol the body and attack indiscriminately when encountering something foreign, therefore a reduced number of neutrophils put an individual at a greater risk of infection.

Since an uncontrolled fungal infection, particularly C. albicans, is often a sign of weakened innate or first responder immune response, the authors therefore suspected that reduced neutrophil numbers may have contributed to the fungal outbreak.

LNPs cause inflammation, and certain inflammatory pathways reduce the production of blood cells. The authors speculated that the two doses of LNPs some mice received may have caused greater inflammation leading to a decline in blood cell production and low neutrophil counts.

Though this is speculation and it is uncertain if the effects in mice would apply to humans, there have been reports in vaccinated individuals of the sudden onset of severe aplastic anemia, a condition where the body can no longer make enough blood cells, particularly red blood cells.

There have also been some reports of COVID-19 vaccinated individuals developing rare fungal diseases and others with worsening of pre-existing fungal diseases.

The first responders mount an immediate attack upon encountering something foreign. However, their attacks are nonspecific and often cannot fully clear infections.

Therefore the adaptive immune cells, also known as T and B cells serve as our second responders.

They are activated around a week into the infection and clear infections by mounting potent and specific attacks.

To activate adaptive immune cells, T and B cells must be presented with information on the pathogen. In the case of Sars-Cov-2, it can be a section of the spike protein.

APCs (antigen presenting cells), a type of first responding cell bring pieces of the virus, bacteria, or infectious particle to the adaptive T or B cells. This will activate the T or B cell, triggering an adaptive immune response.

The image below shows a dendritic cell (APC), activating a T cell by presenting it with an antigen, a toxic or foreign substance.

However, the authors found that mice that were given two doses of mRNA LNPs had reduced antigen presentation compared to mice that were only given one dose of LNPs.

This implies that fewer adaptive immune cells were made to activate against the influenza proteins.

The authors found the mice that received two injections of LNP had lower T and B cell responses to the flu mRNA vaccine than mice that were only given one dose.

As the final line of immune response, T and B cells are critical in our immune system’s ability to clear out infections.

However, in mice given two doses of LNP, less of their T and B cells were activated.

The double-dosed groups also had lower concentrations of antibodies (B cells make antibodies) against the influenza protein.

The reduced adaptive immune response was systemic, persisting across all organs and regions. Yet this reduction was even greater at the site of injection, especially if the mice were given injections at the same place for both shots, according to the authors.

On the other hand, the group that was only given one injection of LNP had higher T and B cell responses with more antibodies produced.

The authors found if the T progenitor cells were removed before vaccination and then returned after vaccination, the active T cell numbers would not be reduced. This suggests that the LNP directly reduce the number of T progenitor cells, and in doing so, reduces the T cell response.

This reduced immunity should not be permanent, the authors speculated.

They noted that B cell responses mostly recovered if an interval of 8 weeks was introduced between the first and second doses.

Nevertheless, the authors did not verify the time period needed for a complete recovery, nor did they verify if the B cell response ever recovered in the mice.

However, injecting mice with adjuvants such as aluminum salts or AddaVax removed the suppressive effects the LNP injections had on mice immune cells.

“Inhibition of the adaptive immune responses by pre-exposure to mRNA-LNPs is long-lasting but it is likely to wane with time.”

Immunity Changes from LNPs Can Be Inherited

As aforementioned, mice that were injected with two doses of LNPs were more resistant against an influenza infection than mice that were only given one dose of LNPs.

This was demonstrated through the mice’s superior maintenance of weight during infection, though it is uncertain if the resistance was from an immune response or some other pathway triggered by the LNPs.

Oddly enough, this increased defensiveness could be passed to their offspring. The inheritance of resistance against influenza is stronger if both parents were immunized, and less so when only a single parent, particularly if only the male parent is immunized.

However, the study did not address if the offspring also inherit immune weakness, such as a decline in immunity against C. albicans, a trait also observed in mice that were given two LNPs doses.

Implication of the Study and Pressing Questions

The findings from the mice study suggest that T and B cell functions are reduced temporarily in mice and raises the question if the same occurs in humans.

The adaptive immune response is critical to clearing infections, and preventing chronic conditions such as cancer. The study suggests that after two vaccinations with the mRNA LNPs, there are a few weeks of vulnerability in mice, putting them at a greater risk of infections and cancer.

Similar reports are also observed in humans, though there is yet to be any study establishing a conclusive link.

However, an increased rate of disease being reported to the Vaccine Adverse Event Reporting System (VAERS) after COVID-19 vaccination suggests reduced immunity in people following vaccination.

There have been many reports of cancers emerging following COVID-19 vaccinations.

In the VAERS database, 284 cases of breast cancer were reported after COVID-19 vaccination, while just 350 cases have been reported in the entire history of VAERS.

There were 269 cases of leukemia reported after COVID-19 vaccination as compared to 432 cases in the entire history of VAERS.

Over the entire history of VAERS, 28,180 cases of shingles have been reported following any vaccination, meaning that around a quarter of shingles cases occurred after COVID-19 vaccination.

The CDC has indicated that a new diagnosis or recurrence of shingles primarily occurs in people with compromised immune systems and is a sign of weakened immunity.

Though the study on mice suggests possible health implications in humans, it is unknown whether all the symptoms and effects seen in mice will occur in people.

“Considering the broad exposure of a large proportion of human populations to vaccines based on this novel (mRNA) technology, more studies are warranted to fully understand its overall immunological and physiological effects. Determining this platform’s short and long-term impact on human health would help optimize it to decrease its potentially harmful effects,” the authors concluded.