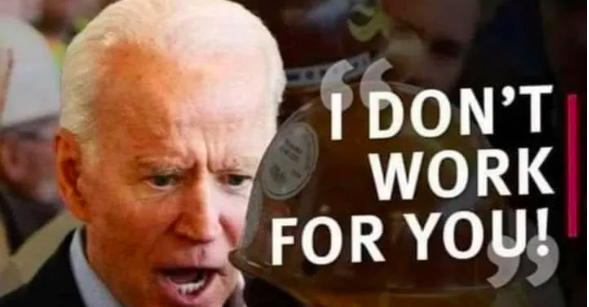 The infrastructure bill was signed by biden – the $1.2 trillion (more like 2 trillion) Infrastructure and Jobs Act on Nov. 15, 2021, marking an important victory following months of quarrels among House and Senate Democrats.

IMPORTANT VICTORY?! An important victory is all satanic pedophile politicians, producers and Hollywood actors jailed, but I digress.

biden signed the bill in front of the White House (Amazon studios or Tyler Perry’s Whitehouse look-alike), while flanked by members of both parties, in an effort to portray the bill to the American people as a bipartisan effort.

“Here in Washington, we’ve heard countless speeches, promises, and white papers from the experts. But today, we are finally getting it done. And my message to the American people is: America is moving again. And your life is going to change for the better.”

America is moving down the toilet, you silly puppet.

“Too often in Washington—the reason we don’t get things done is because we insist on getting everything we want. With this law, we focused on getting things done,” Biden said in a remark aimed at moderates who have stalled Biden’s larger social spending package.

“I am signing a law that is truly consequential, because we made our democracy deliver for the people,” Biden said.

Swing-voting Sens. Kyrsten Sinema (D-Ariz.) and Joe Manchin (D-W.Va.), who keep close ties with Republicans, played a crucial role in crafting the bill and stood behind Biden as he signed the legislation.

On the other side of the aisle, Sens. Lisa Murkowski (R-Alaska), Susan Collins (R-Maine), Bill Cassidy (R-La.), and Rob Portman (R-Ohio), as well as Rep. Don Young (R-Alaska), flanked the president during the signing ceremony.

The bill itself provides around $550 billion to build and maintain roads, bridges, railroads, ports, and other traditional infrastructure across the country. The bill also contains funding for less traditional forms of infrastructure, including tens of billions of dollars to expand broadband access to poorer and rural families.

WHAT A SCAM! It will not cost 2 trillion dollars to repair some roads and bridges. This is a scam to get more money from tax payers. Who do you think is paying for this 2 trillion dollar hoax?

The government has never had money – it takes out loans for EVERYTHING IT BUYS – and the American people pay it back via taxes! The worst part is the money used to build or buy things by government is just printed for nothing by the Federal Reserve! The government is getting money from the people for free!

Before signing the bill, biden announced that Mitch Landrieu, the former mayor of New Orleans, would be responsible for the implementation of the massive bill.

Were the people asked if this money should be spent? NO. Will all of us have to pay this back with interest? YES!

TAXES are illegal! The U.S. Constitution states that taxes ARE ILLEGAL!

The $1.2 trillion measure originally passed the Senate in August with the support of all 50 Democrats and 19 Republicans, including Sens. Mitch McConnell (R-Ky.), Lindsey Graham (R-S.C.), and Mitt Romney (R-Utah).

In a closed-door meeting on Nov. 5, biden and pelosi convinced progressives to vote for the bill on its own.

biden and pelosi “convinced” for the voting of the bill? This is not what most of the people wanted. I thought the people run the show – apparently the U.S. Constitution is ignored by most, if not all, politicians.

Despite failing to win moderate support for the budget at that meeting, the House considered the infrastructure bill and approved it the same day by a 228–206 vote.

The bill is a much-needed win for the president ahead of the 2022 midterms, coming on the back of a significant defeat in Virginia’s gubernatorial race, an unexpectedly poor showing in the blue stronghold of New Jersey, and declining poll numbers for both the president and congressional Democrats.

Democrats’ larger $1.75 trillion package—which, according to the Congressional Budget Office, will actually cost $2.4 trillion—remains in limbo, as neither Manchin nor Sinema have committed to voting for the bill in the upper chamber.

This infrastructure bill is beyond ridiculous and things are only going to get worse!

This madness must end and you can help by NOT COMPLYING if you choose to not wear masks or take their death jabs.