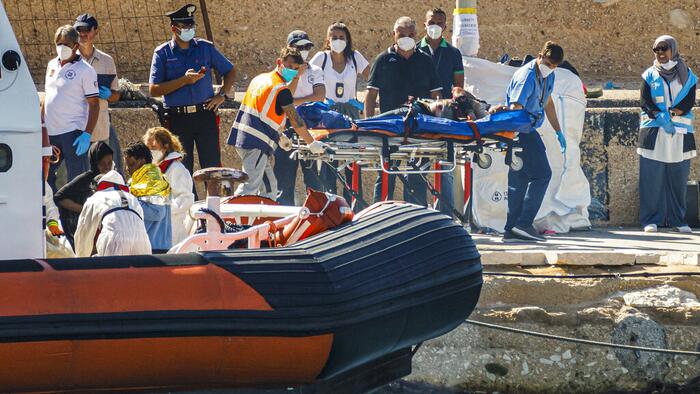 Survivors are disembarked on the tiny Sicilian island of Lampedusa, Italy, Friday, Oct. 21, 2022. Italy’s coast guard says it has found two dead minors on a migrant boat carrying nearly 40 people in the Mediterranean Sea, and a search is underway for a woman reported missing from the vessel. (AP Photo/David Lohmueller)

Three NGO ships with more than 1,000 people on board are waiting to dock off the Italian coast, but Prime Minister Giorgia Meloni and Interior Minister Matteo Piantedosi are firmly refusing German demands that the ships dock in Italian ports.

Rome’s foreign ministry confirmed on Thursday that it had previously sent a verbal note to Berlin asking it to accept the migrants on board the German-registered Humanity 1. The Italian ministry added that the German side had been asked for information on the people on board.

The diplomatic document, dated Oct. 23, was published on Wednesday by public television channel RAI3. In its response, the Berlin foreign ministry urged Rome to provide assistance as soon as possible to the people on board the NGO boat, including more than 100 minors.

“Rescuing people in mortal danger is the most important thing,” read a statement from German embassy urging Italy allow the boats to dock.

“If Germany believes that there is a humanitarian problem, it should take care of it, Italy cannot become the refuge of all immigrants,” said the Minister for Relations with Parliament Luca Ciriani while speaking on the “Agorà” show on the Rai3 television channel.

According to Piantedosi, European countries that flag their vessels should welcome those arriving via the NGOs that use those boats. However, he said the only way to solve the migration flow was to stop departures altogether.

Ciriani backed Piantedosi’s hard line on migration, saying, “We cannot simply be the terminal of choices that take place elsewhere. We are a serious country, Italy is a fully sovereign country.”

“If it intends to act in international waters, then it must also take responsibility for the choices made by the ships flying its flag,” said Ciriani who added, “We cannot accept that Germany decides for us.”

As Remix News previously reported, there are numerous German NGO ships operating in the Mediterranean that rescue migrants but also serve as a draw for many migrants who believe they will be rescued if something goes wrong. The groups have also been accused of cooperating with migrant smugglers and arranging to meet up with smugglers on the open sea to transfer migrants. Many of these ships are supported with funds from German Protestant churches. However, as the German press has reported in the past, the vast majority of these migrants are not refugees, but instead economic migrants.

Italy’s stance may cause another rift within the EU. When Matteo Salvini refused to dock migrants while previously serving as interior minister, migrant numbers dramatically dropped in Italy. However, once he lost power, he was targeted by prosecutors with “kidnapping” charges for defending Italy’s borders and faced harsh prison sentences for his actions.

Italy’s government says it won’t back down

With 179 people on board, Humanity 1 is waiting some 18 kilometers outside Italian territorial waters. Also waiting to dock with 572 people on board is the Geo Barents, a vessel operated by Doctors Without Borders, and the Ocean Viking, a French vessel of the SOS Mediterranée organization, registered in Norway, is carrying more than 200 people. The vessels took on board the people in international waters between Oct. 22 and Oct. 29.

Italy continues to refuse to allow the ships to dock. Ocean Viking had already asked Spain, France, and Greece to do the same on Thursday, according to Hungarian news outlet Magyar Nemzet.

In an interview with the Corriere della Sera, Italian Interior Minister Matteo Piantedosi said that with the new right-wing government, Italy would no longer accept people taken on board foreign ships at sea. He stressed that NGO boats regularly carry out their activities with minimal involvement of the authorities. He noted that 16 percent of people arriving on Italian shores are transported via NGO boats, while local authorities are required to assist the remaining 84 percent.

The interior minister had previously declared the docking of the Humanity 1 and the Ocean Viking unsafe by decree, citing national security reasons.