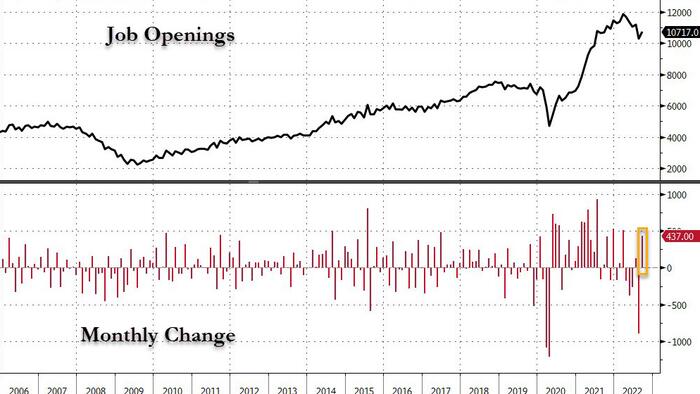 Less than a month after the most recent JOLTS report (for the month of August, recall JOLTS is 2-months delayed) showed a near record plunge in job openings – in line with Fed hopes for a slowing economy and the reality of the slowing labor market – moments ago the BLS, perhaps carried away by next week’s midterms and the relentless taps on the shoulder from various Biden appartchiks, reported that in September – some two months before the midterms – job openings shockingly soared by 437K from a (upward revised) 10.280MM in August (10.053MM pre-revision) to 10.717MM. This was the second highest monthly increase of 2022 and the highest since  the 511K added in March!

Coming a time when the number of unemployed workers allegedly continue to shrink, the surge in job openings meant that we are back to 5 million more job openings (10.717MM) than unemployed people (5.753MM), just shy of the all time high 5.9 million hit in March of 2022.

This means that there were almost 2 job openings for every unemployed worker, or – alternatively – the number of workers competing for every job opening slumped again, and was down to just shy of record lows, at 0.54.

Curiously, while job openings soared, hiring tumbled and in September the BLS reported that total hires dipped to 6.082 million which was the lowest since Feb 2021.

The trend here is clear: down and to the right. According to the BLS, hires decreased in durable goods manufacturing (-57,000) and in state and local government education (-40,000).

And more bad news: the number of quits – or the “take this job and shove it” indicator – continued to deteriorate, and in Sept dropped by 123K to 4,061MM, the second lowest since July 2021.

Yet despite these two clear disappointments, the market will be focused primarily on the sharp reversal in job opening trends, and needless to say, while last month’s huge JOLTS miss sparked a frenzied rally, today’s shocking beat is not helping risk sentiment because if anything, the Fed will have to once again come out as hawkish, as the Fed’s WSJ mouthpiece was quick to remind us.

The Fed would like to see the ratio of vacancies to unemployed workers decline, and it ticked up in September to 1.86 from 1.68.https://t.co/RwwwVqBmFp