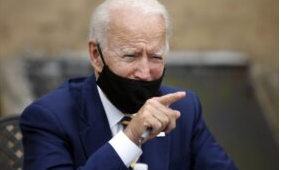 With just weeks before the election, this was billed as an opportunity for undecided voters to hear one of the major candidates answer questions by regular Americans.

And the whole thing was rigged for Biden.

According to reports, a prominent Democratic politician’s spouse was one of the “random” real Americans selected by ABC News to ask Biden a question.

Another random voter that asked a question was a speechwriter for former President Barack Obama, Nathan Osburn.

Osburn worked in the Office of Public Affairs at the Commerce Department under Obama.

“Amy Coney Barrett’s being pushed through at the last minute, even though millions have already voted. So what do you think about ideas from people like Pete Buttigieg and others to put in place safeguards that will help ensure more long-term balance and stability?” Osburn asked.

“And what do you say to LGBTQ Americans and others who are very worried right now about erosions of their rights and our democracy as a whole?”

Biden’s response included the exchange with George Stephanopoulos where the Democratic presidential candidate said he “wasn’t a fan” of court-packing, but wouldn’t declare his position until after Supreme Court nominee Amy Coney Barrett’s confirmation vote.

ABC News failed to disclose the two questioners’ connection to the Democratic Party to viewers.

This isn’t the first time “random” questions given to Biden have come from Democratic operatives. Two weeks ago, NBC News let two questions come from “undecided” voters… who were previously identified as Biden supporters by its sister network, MSNBC.

At the same time Thursday night, hundreds of miles away, President Donald Trump’s own town hall was much more contentious.