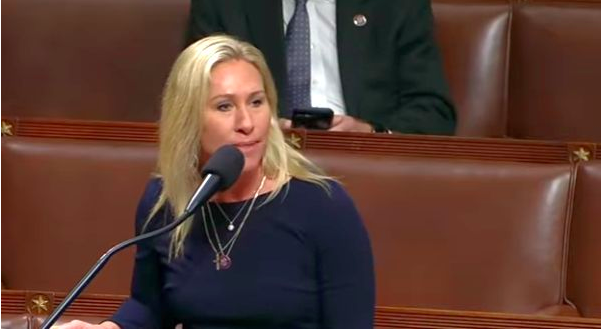 Democrats once again have failed in their attempt to use a Civil War-era provision that those who took part in the Confederacy could not later return to Congress against a sitting member of Congress.

The Washington Examiner explained that Judge Charles Beaudrot, from Georgia’s office of State Administrative Hearings, has recommended to Secretary of State Brad Raffensperger that a claim of “insurrection” against Rep. Marjorie Taylor Green, R-Ga., be dropped.

Raffensperger will make the final decision regarding Greene, who is very popular in her conservative northwest Georgia district, and is just as unpopular in Washington for her blunt, brash and direct way of calling out hypocrisy there.

Democrats wanted her removed from the ballot because she repeatedly has raised questions about the validity and accuracy of the 2020 election, which also was the focus of many who took part in the Jan. 6, 2021, riot at the U.S. Capitol.

Democrats already have filed multiple lawsuits against Republicans claiming that they are barred from the ballot because they took part in an “insurrection.”

However, the claim of “insurrection” comes only for their own talking points, and legal experts say for the provision to apply there would have to be an adjudication of “insurrectionist,” which is far from likely.

A group of Democrats from Greene’s district claimed that she was involved in the riot, so therefore she is an “insurrectionist,” so therefore she cannot run for office again, under Section 3 of the 14th Amendment.

For 25 years, WND has boldly brought you the news that really matters. If you appreciate our Christian journalists and their uniquely truthful reporting and analysis, please help us by becoming a WND Insider!

If you like WND, get the news that matters most delivered directly to your inbox – for FREE!

WND previously reported that Greene, at one point, suggested that if Democrats were going to court to claim she was unqualified for the ballot, she could perhaps persuade some Republicans to make similar charges against Democrats.

In an appearance with Fox News’ Tucker Carlson, she said, “These people hate the people in my district so much, they look down on them because they voted for me and sent me to Washington to fight for the things that most Americans care about like secure borders, stopping abortion, protecting our Second Amendment, stopping the out of control spending in Washington and stop funding never ending foreign wars and the insanity that takes place in Washington.”

She continued, “Well, I went there and I have been fighting it, and now the progressives, the people who donate money to dark money groups, you know the 501(c)(3)s and the foundations, they’ve hired up some attorneys from New York who hate the people in my district and don’t believe they should have the right to elect who they want to send to Washington which is me.

“I have overwhelming support in my district and I’m so thankful for all of them,” she said. “Well, now they’ve filed a lawsuit because they’re trying to rip my name off of the ballot and steal my district’s ability to reelect me and send me back to Congress.”

She continued, “You know, there’s something that I have learned and I think that this is really important, you know if you can challenge any representative’s candidacy or elected office holder, then I bet you we could round up some Republican voters who didn’t like Kamala Harris funding rioters, criminal rioters out of jail or Ilhan Omar or Cori Bush or Maxine Waters inciting riots.”

Analysts have called the claims against Greene mostly “frivolous.”

It’s not the only case launched by Democrats in a “lawfare” campaign to take down Republicans.

WND reported earlier when the same claims were made by leftists in Wisconsin against that state’s GOP members.

However, WND already has reported on a federal judge’s rejection of virtually the same allegations in a case involving Rep. Madison Cawthorn, a Republican from North Carolina.

There, the state elections officials claimed they had the power to determine his “eligibility” based on that Civil War-era provision, and Cawthorn sued.

A federal judge issued an injunction against the Board of Elections that prohibits the board of hearing challenges on the basis of insurrection.

According to officials with the Bopp Law Firm, who have been working with Cawthorn, a group organized in the state against Cawthorn filed a complaint with the state board demanding that Cawthorn be prevented from running for his congressional seat.

The judge held that due to the substantial likelihood that Cawthorn’s candidacy will be significantly impacted by the challenges before the upcoming primary, it was proper for the court to determine whether the board could proceed with the challenge.

And the ruling said the state law violated federal law to the extent challenges are based upon the “insurrection” clause of the Fourteenth Amendment, because Congress removed that amendment’s application to any current members of Congress in The Amnesty Act of 1872, the law firm reported.

In Wisconsin, a local report said the liberals continued to claim the Republicans “are no longer qualified” to seek re-election.

The legal claims allege the Republicans are “part of a conspiracy theory and ‘spreading their malicious falsehoods about a ‘rigged election’ through regular and social media and at public appearances.'”

Democrats for the last year have speculated that they would use “lawfare,” legal cases assembled for political purposes, to try to hurt Republicans.

WND previously reported when the Democrats adopted an agenda that defines the Jan. 6 riot as an insurrection, even though those arrested and charged generally are facing counts like trespassing.

The goal, however, was to use that long-dormant constitutional provision adopted after the Civil War that prevents members of Congress from having participated in an “insurrection,” like the Civil War.

Democrats and leftists say GOP members who even joined in the questioning of the 2020 results are guilty.

Constitutional expert Jonathan Turley pointed out that that position by North Carolina, which claimed the authority to determine Cawthorn guilty, “is wholly outside of the language and intent of this provision. Cawthorn is right to challenge any such action as unconstitutional.”

He explained if that state board claim were to be adopted, it would “invite partisan and abusive practices by such boards. It is also wrong on the purpose of this constitutional provision. Moreover, there is a vast difference between enforcing an objective standard on the age of a candidate and enforcing the subjective standard whether that candidate’s views make him an ‘insurrectionist.'”

A long list of questions have, in fact, been raised about the 2020 election.

What is known is that a number of issues remain under investigation. A coming documentary reveals hundreds of “mules” were hired to dump piles of mail-in ballots in drop boxes during election night’s overnight hours.

Also, independent analyses have concluded either of two ways likely “bought” the election for Biden. One was the $420 million Mark Zuckerberg gave to mostly leftist election officials with instructions to recruit voters from Democrat districts, and the other was the collusion by legacy and social media companies that decided to suppress accurate, and damaging, reports about the Biden family international business scandals just before the election.

Further, multiple state and local officials simply ignored their own state laws regarding the handling of mail-in ballots.

Meanwhile, Just the News has compiled a list of 20 situations that suggest fraud or irregularities in the 2020 election.

They include that Iranian nationals hacked into a state computer election system and stole 100,000 voter registrations and used them to try to intimidate Republicans, a former state Supreme Court justice concluded there was bribery in Wisconsin’s election count, there was illegal ballot harvesting in several states, vote signature requirements may have been violated involving 200,000 ballots in Arizona, the widely used ballot drop boxes were, in fact, illegal, foreign voters were found on voter rolls in Texas and Georgia, a number of mail-in ballot strategies were unconstitutional, voter roll laws were not followed and more.