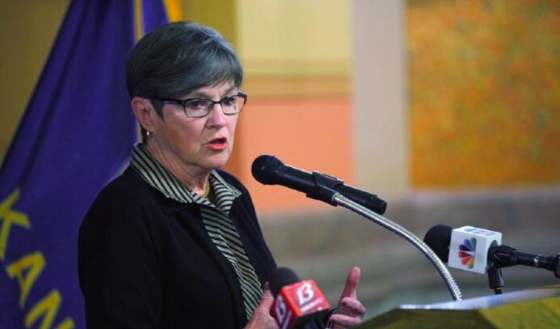 The governor of Kansas has said she intends to sign a measure that will force businesses that require COVID-19 vaccination to give broad exceptions to workers who don’t want to get the vaccine.

Kansas Gov. Laura Kelly, a Democrat, said in a one-sentence Nov. 22 statement that she will sign the legislation “when it reaches my desk.”

Derek Schmidt, Kansas attorney general and a Republican, also said he would sign it if he were governor. Schmidt is challenging Kelly in the Kansas gubernatorial race.

The Republican-controlled state House of Representatives and state Senate approved House Bill 2001 earlier on Nov. 22 during a special session. The Senate vote was 24–11 and the House vote was 78–41.

The legislation (pdf) states that any employer who imposes a COVID-19 vaccine requirement must exempt workers if they submit a written waiver request stating that complying with the requirement would endanger the life or health of the waiver applicant or somebody they live with or if receiving the vaccine violates a sincerely held religious belief.

Any workers punished or terminated due to violation of the law would be able to file a complaint with state officials, who would be mandated to investigate each complaint and issue an order on each case within 60 calendar days.

Another major component of the legislation requires that workers who get laid off due to vaccination requirements be eligible for unemployment benefits.

Kansas Senate President Ty Masterson, a Republican, said the measure will “protect the rights of Kansans who are facing impending deadlines from the Biden administration that would force them to choose between their livelihood and their religious freedom or their livelihood and advice from their own physician.”

The legislation prevents President Joe Biden “from forcing businesses into the position of playing God or doctor,” he said.

Masterson appeared to be referring to the Biden administration’s vaccine mandates against businesses and federal contractors.

The business mandate is on hold after a flurry of legal challenges, while the deadline for the contractor mandate was recently pushed back to Jan. 4, 2022.

Biden administration officials have said the mandates are aimed at keeping people safe, though studies show that the COVID-19 vaccines have limited effectiveness in terms of blocking transmission.

Kelly spoke out about the business mandate earlier this month.

Rep. Linda Featherstone, a Democrat, was one of the lawmakers who voted against HB 2001.

“I cannot vote for something that makes hospitals more dangerous for workers and patients, codifies vaccine misinformation, and undermines the financial stability of all medical facilities that receive federal aid,” Featherstone said in a statement.