Kyle Rittenhouse is Free – and the Left is Enraged 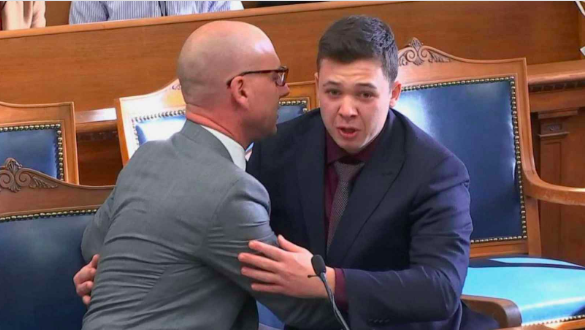 There isn’t supposed to be justice in America today for those who resist leftists.

Against all odds, the verdict came down just the way it would have before there came to be a two-tier justice system in America, with Leftists (Hillary Clinton, Andrew Cuomo, Joe Biden, Hunter Biden) enjoying the “privilege” that they claim white people enjoy, and evading all legal consequences no matter how egregiously they flout the law. Kyle Rittenhouse was acquitted of all charges, as was only fitting and proper: it was abundantly clear from video evidence that he acted in self-defense in the killings of Anthony Huber and Joseph Rosenbaum, and the wounding of Gaige Grosskreutz. It was so clear that he was defending himself, in fact, that he should never have been tried in the first place, and only was put on trial in order to appease Leftists outraged that he had dared to resist the violent rioters they have appallingly likened to the heroes who stormed the Normandy beaches.

Nonetheless, justice was done, and that means that the Left is even more enraged now than it was already. Joe Biden, who has a half-century of public lying under his belt, showed yet again that he lied when he said that he would work for national unity. His handlers issued a statement that depicted the ostensible president stoking the flames of outrage: “While the verdict in Kenosha will leave many Americans feeling angry and concerned, myself included, we must acknowledge that the jury has spoken.”

Angry and concerned about what, Joe? That one American had shown that he wouldn’t take it lying down when Antifa and Black Lives Matter showed up to burn down a city?

Other Leftist leaders were much more explicit than Biden’s handlers about what exactly made them so angry. Rep. Cori Bush (D-Race Baiter) tweeted: “The judge. The jury. The defendant. It’s white supremacy in action. This system isn’t built to hold white supremacists accountable. It’s why Black and brown folks are brutalized and put in cages while white supremacist murderers walk free. I’m hurt. I’m angry. I’m heartbroken.” At least one tweeter tried to inject a bit of sanity into the proceedings, responding: “Every single person involved in this shooting is/was White. Even the attorneys and judge are White. Where is racism involved? It’s an honest question.”

No answer was forthcoming, of course. How could there be, when Bush’s statement was so far from reality that even Salvador Dali would stand back in awe? Bush’s central assumption, of course, was that white people can essentially do whatever they want in America, without fearing any legal consequences. This is so ridiculous as to defy rational consideration, but it was also ominous: in Cori Bush’s ideal America, violent rioters can maraud at will with no fear of resistance, because anyone who dares to stand up to them will be smeared as a “white supremacist” and found guilty because of that designation, regardless of the facts of the case.

Bush’s hysterical response to the verdict was similar to that of former New York Governor Andrew Cuomo (D-Nursing Homes), who tweeted: “Today’s verdict is a stain on the soul of America, & sends a dangerous message about who & what values our justice system was designed to protect[.] We must stand unified in rejecting supremacist vigilantism & with one voice say: this is not who we are.”

But even worse may be the fallout from the Rittenhouse verdict. Watch for numerous new initiatives from Leftists in power to curb “white supremacy” in our justice system, which means to make it more difficult for people to defend themselves from violent Leftists. Kyle Rittenhouse had the effrontery to fight back and win; this must never be allowed to happen again. As always when faced with a loss, Leftists will overplay their hand. In the coming months, lovers of freedom will need to stand stronger than ever.