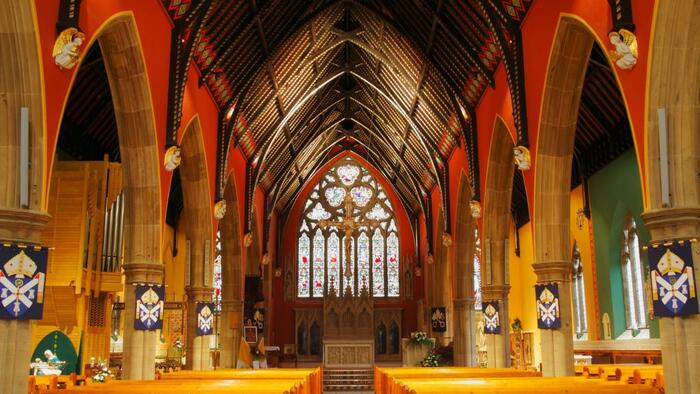 When it comes to sexual deviancy among priests who are supposed to be celebrate, it’s not just about the kids – although pedophilia does come up in this report.

According to The Sunday Times, the Vatican is now investigating allegations of a lockdown ‘sex party’ in the priest’s quarters at St. Mary’s Cathedral in Newcastle, UK.

“A number of complaints were made by individuals within the diocese after information came to light about a sex party taking place in the priests’ living quarters attached to Newcastle cathedral,” a diocese source told the outlet. A second source said: “The cathedral had become a laughing stock.”

And in a letter seen by the Times, the investigation has been assigned to the Archbishop of Liverpool, who’s been ordered to produce “an in-depth report into the events leading up to Bishop Byrne’s resignation.”

There is no suggestion that Byrne, who served both Hexham and Newcastle, participated in the alleged party inside a property adjoining St. Mary’s Cathedral, Newcastle, curing the Covid-19 lockdowns, nor whether he was aware of it.

The churches had remained closed for much of the pandemic lockdowns, with only religious funerals allowed. But Father Micael McCoy, who Byrne installed in 2019, is said to have approached several worshippers, asking if they would like to attend “a party” at the cathedral, according to a source close to the investigation.

McCoy notably committed suicide in April 2021 after finding out that he was under investigation by Northumbria police’s child and adult protection department over a historical child sex abuse allegation made against him (there it is).

And in another related pedo investigation, the Catholic Safeguarding Standards Agency (CSSA) will focus on convicted sex offender, Father Tim Gardner, and his relationship with the diocese. Gardner admitted in a London court to making and/or possessing thousands of indecent images of children.

He was caught with more than 500 pictures of children and more than 5,000 prohibited images downloaded on to his computer. Gardner, aged 42 at the time, who was teaching religious education at a Catholic school in north London, also pleaded guilty to ten counts of making indecent images of children and one count of possession of prohibited images. He was sentenced to eight months in prison, suspended for two years. -The Times

The investigation is a rare move by the Dicastery for Bishops – the department within the Vatican tasked with nominating bishops and overseeing their performance worldwide, and which answers directly to the pope. Last week the CSSA confirmed that it had begun an “unscheduled safeguarding audit” in the Hexham and Newcastle diocese.

“The scope of the investigatory work will cover any reported abuses, alleged abuses, safeguarding concerns and the culture of safeguarding in the diocese as a whole,” said Steve Ashley, CSSA CEO, adding that their work was “independent” and had “full autonomy over our findings.”

“There should be no doubt that we will leave no stone unturned when it comes to keeping people safe, and this includes investigating the safeguarding culture in Hexham and Newcastle,” said Nazir Afzal, chairman of the CSSA and former chief prosecutor for the northwest of England.