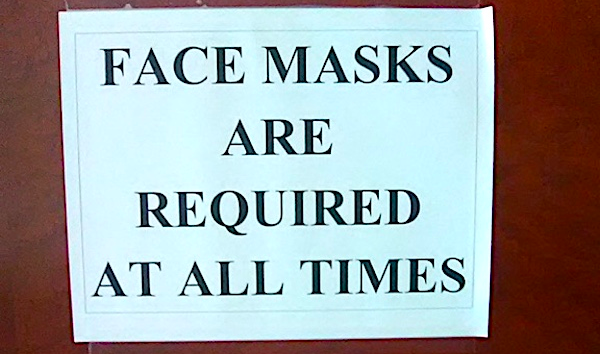 As in “part of normal operations.”

That’s from a report by Jeffrey Tucker, the institute’s founder who has authored thousands of articles and multiple books, mostly recently on “Liberty or Lockdown.”

He explains the bureaucracy that went wild during COVID, demanding masks when science showed they were less than effective, insisting on lockdowns that crippled parts of the American economy, demanding shots that included sometimes lethal side effects, “has now codified this into a new online tool that instructs cities and states precisely of what they are supposed to do given a certain level of community spread.”

He wrote that it’s already proven its absurdity by calling for “major parts of southern Florida” to be in masked-up mode, when in fact, “Hardly anyone in Florida has worn a mask since 2020. The very notion is a joke there. However, what happens to the other states and what happens when or if political control of Florida changes to a pro-lockdown party?”

He said the CDC agenda isn’t even new.

“We’ve seen this movie before. It’s a recipe for full government control of life.,” he explained.

The site gives color codes for various parts of the nation, and under an orange level rating, people are supposed to wear a mask indoors in public, keep up with vaccinations, get tested and more.

“Some standout points here. Masks have nowhere controlled the spread of COVID. We know this from countless examples all over the world. They have been a spectacular failure except as signals to others to feel a sense of alarm at the presence of disease. Neither have vaccinations achieved the stopping or even slowing of infection or spread. Note the new language too: ‘Stay up to date.’ Vaccinations are headed toward the WEF ideal of subscription plans,” he explained.

As for the government’s references to “additional precautions?”

“We know what that means: lockdowns,” he said.

That includes isolation, quarantine, screening, and “enhanced” other methods.

The tool, he explained, also can easily “move to a next iteration by the addition of a red color: it could mean shelter in place, close the schools, don’t go to church, don’t see friends, and so on.”

The result, he warned, is there “is nothing really in place that would stop a public health department anywhere in the country from implementing them on their own. Anyone objecting is immediately on the back foot, attempting to justify the refusal to obey the CDC and thereby opening themselves up to the accusation that they are killing grandma and so on.”

“This is about much more than lockdowns. It’s about life itself, particularly as it affects economics,” he warned, citing the results of the first pandemic: “It’s not just inflation. It’s class mobility, demoralization, goods availability, and a general sense that hope in the future isn’t what it used to be just a few years ago.”

He explained, “We’ve just experienced years in which it was demonstrated to the U.S. and the entire world how pandemic control can be deployed to utterly crush rights, freedoms, constitutional limits on states, and even everything we call civilization itself.”

He said the CDC, in light of the realities, should “cease and desist.”