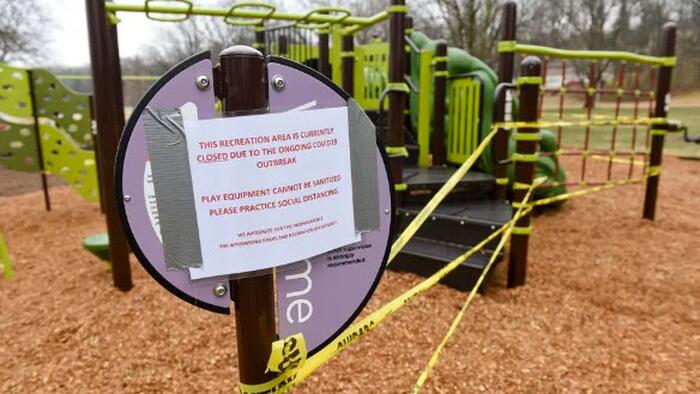 Authored by Michael Senger via ‘The New Normal’ substack,

More than two years since the lockdowns of 2020, the political mainstream, particularly on the left, is just beginning to realize that the response to Covid was an unprecedented catastrophe.

But that realization hasn’t taken the form of a mea culpa. Far from it. On the contrary, in order to see that reality is starting to dawn on the mainstream left, one must read between the lines of how their narrative on the response to Covid has evolved over the past two years.

The narrative now goes something like this: Lockdowns never really happened, because governments never actually locked people in their homes; but if there were lockdowns, then they saved millions of lives and would have saved even more if only they’d been stricter; but if there were any collateral damage, then that damage was an inevitable consequence of the fear from the virus independent of the lockdowns; and even when things were shut down, the rules weren’t very strict; but even when the rules were strict, we didn’t really support them.

Put simply, the prevailing narrative of the mainstream left is that any upside from the response to Covid is attributable to the state-ordered closures and mandates that they supported, while any downside was an inevitable consequence of the virus independent of any state-ordered closures and mandates which never happened and which anyway they never supported. Got it? Good.

This perplexing narrative was perfectly encapsulated in a recent viral tweet by a history professor who griped about the difficulty of convincing his students that government mandates had nothing to do with the fact that they couldn’t leave their homes in 2020.

Similarly, in an interview with Bill Maher, celebrity scientist Neil DeGrasse Tyson argued that we can’t assess the effects of lockdowns and mandates because the counterexamples, like Sweden, are too different to be applicable. (Starting at 2:15).

In fact, as DeSantis pointed out, Crist had publicly sued DeSantis to keep kids out of school in 2020, and he wrote DeSantis a letter in July 2020 saying the entire state should still be in lockdown.

Charlie Crist attempts to paint Gov. Ron DeSantis as “the shutdown guy” immediately after DeSantis talks about how he rejected Crist’s calls to shut the state down. pic.twitter.com/0XoEbgq4Pg

Arguments like these are as facile as they are transparent. Does anyone honestly think these people would be arguing that lockdowns didn’t happen, or that it’s impossible to measure their effects, if the policy had been a success?

As is extraordinarily well-documented by data, video evidence, news reports, government orders, testimonial evidence, and living memory, the strict lockdowns of spring 2020 were all too real. And few people publicly opposed them.

As former UN Assistant Secretary-General Ramesh Thakur has documented in meticulous detail, the harms that lockdowns would cause were all well-known and reported when they were first adopted as policy in early 2020. These included accurate estimates of deaths due to delayed medical operations, a mental health crisis, drug overdoses, an economic recession, global poverty and hunger. In March 2020, the Dutch government commissioned a cost-benefit analysis concluding that the health damage from lockdowns—let alone the economic damage—would be six times greater than the benefit.

Yet regardless, for reasons we’re still only beginning to understand, key officials, media entities, billionaires and international organizations advocated the broad imposition of these unprecedented, devastating policies from the earliest possible date. The resulting scenes were horrific and dystopian.

People lined up outdoors in freezing temperatures to get food.

It’s before the crack of dawn on a Saturday morning, yet the line outside the Winco Foods grocery store on Coffee Road stretches around the block. Market employees are allowing 15 people in at a time. Some folks have been in line since 3 a.m. pic.twitter.com/hPYuhnQUwY

In many cities, still-sick patients were tossed out of hospital beds and sent back to nursing homes.

Playgrounds were taped up.

Parks and beaches were closed, and some mainstream commentators argued that those closures should be even stricter.

Many who flouted these closures were charged or arrested.

Stores, and sometimes sections of stores, that were deemed “non-essential” were cordoned off.

School closures caused an unprecedented learning setback, especially for the poorest students. But even when schools were open, kids had to sit for hours in masks, separated by plexiglass barriers.

Many kids were forced to eat lunch outside in silence.

CHILD ABUSE: Kindergartners are forced to eat lunch outside in 40 degree weather at Capitol Hill Elementary School in Portland, Oregon.

They sit on buckets to social distance from their classmates. pic.twitter.com/KqFcliTFYf

Countless small businesses were forced to close, and more than half of those closures became permanent.

Cars lined up for miles at food banks.

The Financial Times reported that three million in the United Kingdom went hungry due to lockdown.

The situation was far worse in the developing world.

If these horror stories aren’t enough, the raw data speaks for itself.

The mainstream left’s newfound reluctance to refer to these policies as “lockdown” is especially curious, because they showed no such reluctance at the time they were actually implementing lockdowns in 2020.

By pretending that all of these horrors were attributable to public panic, apologists for the response to Covid are attempting to shift blame away from the political machines that imposed lockdowns and mandates onto individuals and their families. This is, of course, despicable and bunk. People did not voluntarily go hungry, or stand in the freezing cold to get food, or remove themselves from hospitals while they were still sick, or bankrupt their own businesses, or force their own kids to sit outside in the cold, or march hundreds of miles in exodus after losing their jobs in factories.

The collective denial of these horrors, and the refusal of media, financial, and political elites to report on them, amounts to nothing less than the greatest act of gaslighting that we’ve seen in modern times.

Further, the argument that all of these terrible outcomes could be attributed to public panic rather than state-imposed mandates would be far more convincing if governments hadn’t taken unprecedented actions to deliberately panic the public.

A report later revealed that military leaders had seen Covid as a unique opportunity to test propaganda techniques on the public, “shaping” and “exploiting” information to bolster support for government mandates. Dissenting scientists were silenced. Government psyops teams deployed fear campaigns on their own people in a scorched-earth campaign to drive consent for lockdowns.

Moreover, as a study by Cardiff University demonstrated, the primary factor by which citizens judged the threat of COVID-19 was their own government’s decision to employ lockdown measures. “We found that people judge the severity of the COVID-19 threat based on the fact the government imposed a lockdown—in other words, they thought, ‘it must be bad if government’s taking such drastic measures.’ We also found that the more they judged the risk in this way, the more they supported lockdown.” The policies thus created a feedback loop in which the lockdowns and mandates themselves sowed the fear that made citizens believe their risk of dying from COVID-19 was hundreds of times greater than it really was, in turn causing them to support more lockdowns and mandates.

Those who publicly spoke against lockdowns and mandates were ostracized and vilified—denounced by mainstream outlets like the New York Times, CNN, and health officials as “neo-Nazis” and “white nationalists.” Further, among those who really believed the mainstream Covid narrative—or merely pretended to—all the authoritarian methods that had supposedly contributed to China’s “success” against Covid, including censoring, canceling, and firing those who disagreed, were on the table.

Though many now claim to have opposed these measures, the truth is that publicly opposing lockdowns when they were at their apex in spring 2020 was lonely, frightening, thankless, and hard. Few did.

The gaslighting is by no means limited to the political left. On the political right, which now generally acknowledges that Covid mandates were a mistake, the revisionism is subtler, and tends to take the form of elites casting themselves—falsely—as having been anti-lockdown voices in early 2020, when the record is quite clear that they were vocal advocates of lockdowns and mandates.

Fox News host Tucker Carlson now rightly acts as a champion of the anti-mandate cause, but in fact Carlson was one of the most influential individuals who talked Donald Trump into signing onto lockdowns in early 2020. The UK’s short-lived Prime Minister Liz Truss stated that she’d “always” been against lockdowns, but she publicly supported both lockdowns and vaccine passes. Likewise, Canada’s conservative leader Pierre Poilievre now casts himself as an anti-mandate leader, but he supported both lockdowns and vaccine mandates as they were happening.

As Ben Irvine, author of The Truth About the Wuhan Lockdown, has tirelessly documented, right-wing publications including the UK’s Daily Telegraph now routinely act as opponents of lockdowns and mandates, while staying silent as to their own vocal support for strict lockdowns in spring 2020. And the same goes for countless other commentators and influencers on the political right as well.

To those who know their history, this wholesale gaslighting by elites on both the left and the right, while galling, isn’t terribly surprising. Most elites obtain power by doing whatever is in their own perceived best interest at any given time. They didn’t support lockdowns for any moral or even utilitarian reason. Rather, in spring 2020, elites calculated supporting lockdowns to be in their own best interest. Two years later, many now calculate it to be in their best interest to pretend they were the ones who always opposed lockdowns—while sidelining those who actually did.

This revisionism is all the more disappointing because a small handful of politicians including Ron DeSantis, Imran Khan, and Alberta Premier Danielle Smith have proven that admitting error in implementing lockdowns and mandates isn’t that hard, and can even be politically profitable.

The same should go for the political left. Thus far, we have yet to see anything remotely resembling regret from any leader on the left, but this is what a decent, Truman-era Democrat might say in these circumstances:

“The lockdowns of 2020 were a terrible mistake. While they were outside my field, it was my duty to properly vet the credibility of the advice that was coming from health officials and to end the mandates as soon as it was clear they weren’t working. In that role, I failed, and you all have my humblest apologies. Given the unprecedented harm that’s been done by these mandates, I support a full investigation into how this advice came about, in part to ensure there hasn’t been any untoward communist influence on these policies.”

Those who spoke against lockdowns and mandates in early 2020 showed that they were willing to stand up for the freedoms and Enlightenment principles for which our forebears fought so tirelessly, even when doing so was lonely, thankless, and hard. For that reason, anyone who did so has reason to feel extremely proud, and the future would be brighter if they were in positions of leadership. That fact is now becoming increasingly clear—unfortunately, even to those who did the opposite. One more reason to keep all the receipts.

Michael P Senger is an attorney and author of Snake Oil: How Xi Jinping Shut Down the World. Want to support my work? Get the book.