Long-Delayed Cold Weather To Blanket Much Of US 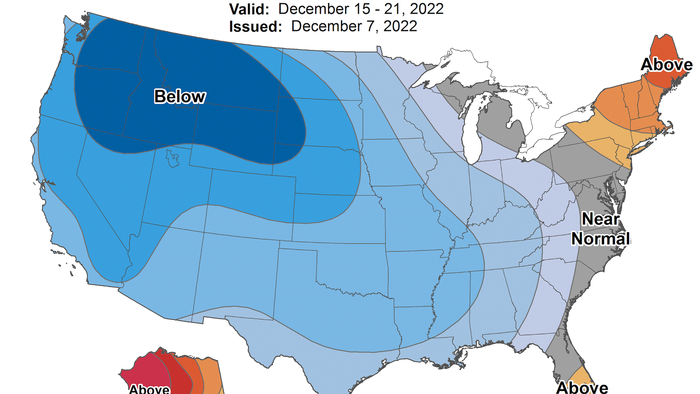 NOAA’s temperature outlook forecasts the West, Southwest, and Midwest, as well as parts of the Southeast (excluding coastal areas), will experience below-average temperatures between Dec.15-21. The forecast was issued on Dec. 7. As for the Mid-Atlantic, temperatures are expected to be around average, while temperatures in the Northeast will be above average.

Lower 48 average temperatures are currently well above average. On Wednesday, the national average was 10 degrees above a 30-year mean, though forecasts show a cold pattern will begin at the end of this week and push temperatures down well below average through Dec. 21.

Heating demand is expected to rise ahead of Christmas.

Houston-based energy firm Criterion Research pointed out on Nov. 23, “The United States has officially flipped over to withdrawal season.”

US natural gas futures bid yesterday after falling more than 27% since late November after weather forecasts for the US switched from cold to warm. Cold weather is finally on the way, which could put a bid under NatGas.

As for the Northeast, The Washington Post said, “The Mid-Atlantic and Northeast still appear on track to turn more wintry during the second half of the month. As Christmas approaches, if you’re rooting for snow, waiting is often the hardest part.”