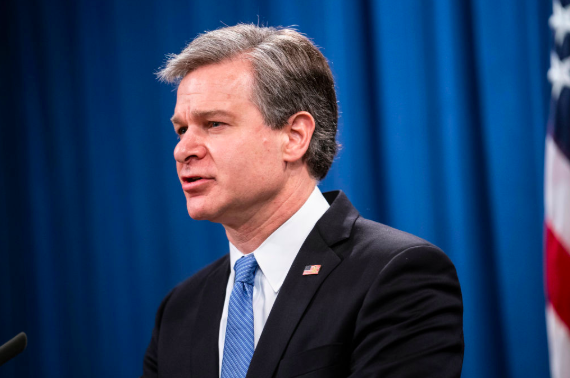 FBI director Christopher Wray has spoken openly about Chinese intelligence efforts inside the US, including activities by united front organizations, saying, “We’ve reached a point when the FBI opens a new case related to Chinese intelligence every 10 hours.” Pictured: Wray speaks at a press conference on October 28, 2020, after US authorities arrested eight people as part of an investigation into a program called “Foxhunt,” created by Chinese leader Xi Jinping. Foxhunt is China’s way “to target Chinese nationals whom Xi sees as threats and who live outside of China across the world.” (Photo by Sarah Silbiger/Getty Images)

China obsesses over what the world thinks of it. Its rise to rival the US as the world’s greatest economic superpower includes a strong psychological element. China seeks not to be feared, but as having peaceful intentions. Looking at its use of “united front” tactics reveals how China’s messaging seeks to convince gullible people in the West that Chinese interests are really their interests, too. This is one example where Chinese communism borrows “Russian characteristics,” using the old Soviet tactic of “united front” groups that wittingly or not do their bidding.

Within the Chinese Communist Party (CCP) is the United Front Work Department (UFWD), a bureaucracy that oversees the CCP’s foreign-influence network. In recent years, concern has grown about UFWD’s efforts to influence how Western democracies view China. A report from the Australian Strategic Policy Institute warned UFWD and other affiliated organizations have worked among the elites of many countries to influence foreign opinions of China.

Newsweek did an extensive report that linked 600 groups operating in the US to the CCP. These groups “range from businesses, universities and think tanks, social and cultural groups, Chinese diaspora organizations, Chinese-language media and WeChat, the Chinese social media and messaging app,” according to John Garnaut, an Australian political analyst and expert on global CPC interference. These groups all regularly communicate with the CCP. They organize social and business meetings, obtain information of various kinds, and build the economic and political ties within the US that can be leveraged for Beijing’s advantage.

In my investigative reporting I have seen this pattern play out at the highest levels. Hunter Biden’s extensive dealings with business entities linked to the CCP and the People’s Liberation Army, as well as Chinese banks and Chinese industry all make perfect sense when viewed through the lens of China’s strategy to ingratiate itself with the highest levels of American politics, commerce, academia, and culture.

First, they ingratiate. Then, they co-opt.

For one brief example, in 2017 Hunter Biden rented office space in Washington, D.C. Asking for signage for the office, Hunter said his new office mates would include Joe, Jill, and James Biden, and Gongwen Dong, a Chinese national who was an emissary for CEFC, a Chinese energy giant, and the CFO of a China-based real estate investment firm called Radiance Property Holdings. This firm is run by Lam Ting Keung, a businessman with deep connections to “united front” groups linked to Chinese intelligence.

Last year, in an eye-opening and frank discussion at the Hudson Institute, Christopher Wray, director of the FBI, spoke more openly than ever about Chinese intelligence efforts inside the US, including activities by united front organizations. “We’ve reached a point when the FBI opens a new case related to Chinese intelligence every 10 hours.” Wray stressed that he meant the Chinese government and the CCP specifically. But it is through groups linked to the UFWD that China identifies and pursues many of its intelligence targets.

As one example, Wray described a program called “Foxhunt” created by Chinese leader Xi Jinping. Foxhunt is China’s way “to target Chinese nationals whom Xi sees as threats and who live outside of China across the world… political rivals, dissidents, and critics seeking to expose China’s extensive human rights violations.” These victims — some of whom are American citizens and green card holders — are openly or indirectly threatened, often by having their relatives back in China arrested as leverage.

Wray spoke at length about China’s intimidation exercises on American businesses, policymakers, academia, even professional basketball players, using more subtle approaches. Instead of arresting your relatives back home until you do what they want, the Chinese take away your millions of dollars in sneaker sales or NBA jersey revenue. It seems to work.

Wray used a phrase common among counter-intelligence professionals: “malign foreign influence.” This phrase describes the covert efforts the FBI has seen in several cases where American politicians were influenced indirectly to adopt policies the Chinese regime desires, particularly in four areas: Hong Kong, Taiwan, human rights abuses against the Uighurs, and the Chinese government’s role in the Covid-19 pandemic.

That is fascinating considering that, just this month, the U.S. State Department announced it would stop using that phrase. A State Department spokesperson explained to National Review that “malign influence” was too generic a phrase and might undercut “our goal of identifying specific behaviors of concern, especially those posing serious threats to U.S. national security or the international rules-based order.” The spokesperson wanted to make it clear that “U.S. criticism is not directed toward PRC nationals, the global Chinese diaspora, or U.S. citizens of Chinese descent, as well as citizens of other countries who are of Chinese ethnicity or heritage.”

The irony here is that those “PRC nationals” the State department wishes not to offend are exactly the kinds of people that are employed by or connected to UFWD entities operating in the U.S. The statement reads as though the State Department does not quite understand the extent of leverage and control Beijing can exert, even on an American citizen. Instead, State seems to have agreed with the Quincy Institute. Quincy’s Jessica Lee claimed credit for State’s turn away from calling out the party-state’s malign influence during a public webinar last month. She said:

“My communication with Asian-American diplomats at the State Department shows that the work that we’re doing to shine light on these issues is having a positive impact in ensuring that we don’t use sweeping terms like ‘malign influence’ to describe China’s influence.”

In Congress, Republican members of the House Foreign Affairs Committee have tried twice to sanction entities linked to UFWD, but committee chairman Rep. Gregory Meeks (D-NY) has consistently rebuffed them. In September they offered an amendment to the National Defense Authorization Act which would have required the Secretary of State to report to Congress on whether the UFWD can be sanctioned under existing laws that allow the executive branch to punish entities involved in China’s crackdown in Hong Kong, its repression of Uyghurs in Xinjiang province, its cyber-attacks against western government and industrial targets, and its transnational criminal activities.

One cannot but marvel at the deference shown in so many places to the persistent threat of China’s malign foreign influence on aspects of American policy and life. The pattern is worth continued study.

Peter Schweizer, President of the Governmental Accountability Institute, is a Gatestone Institute Distinguished Senior Fellow and author of the best-selling books Profiles in Corruption, Secret Empires and Clinton Cash, among others.