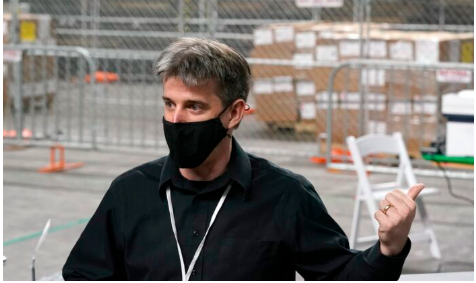 Teams conducting a forensic audit in Arizona’s largest county said on July 15 that they want more items to complete their review, which has turned up several major discrepancies.

The auditors, led by Florida-based Cyber Ninjas, want ballot envelope images, router images, splunk logs, hard drives that contain information about the 2020 election in Maricopa County, and details on the county’s policies and procedures as they try to complete a review that started nearly three months ago.

That information could help clear up issues that have been identified.

Doug Logan, CEO of Cyber Ninjas, told senators at the Arizona State Capitol during a hearing that auditors can find no record of the county sending more than 74,000 mail-in ballots. Ben Cotton, CEO of CyFIR, a subcontractor working on the audit, said the analysis of the election management system and network uncovered “severe cybersecurity problems,” including that antivirus programs weren’t up to date.

Logan said the discrepancies with mail-in ballot records should trigger a canvassing proposal that was put on hold under pressure from the Department of Justice.

The July 15 testimony, given in front of Fann and Sen. Warren Peterson, chairman of the state Senate’s Judiciary Committee, immediately triggered a push to conduct a new election in the state, where President Joe Biden beat former President Donald Trump by about 10,500 votes.

“I call for the Biden electors to be recalled to Arizona & a new election must be conducted. Arizona’s electors must not be awarded fraudulently & we need to get this right,” Arizona Sen. Wendy Rogers, a Republican who has been keeping close tabs on the audit, said on Twitter.

But Maricopa County officials disparaged the hearing on social media, calling the firms conducting the audit unqualified. Representatives for the county didn’t respond to a request for comment by press time.

The county also repeated an earlier claim that Cotton “walked back” a statement that files were deleted from one of the country’s machines. Cotton has said he didn’t backtrack on the allegation.

“If you didn’t subpoena it, there’s a reason you don’t have it,” the county said in response to the push to acquire more items, such as hard drives, for the audit.

Routers or router images were included in subpoenas the Arizona Senate sent last year that were confirmed legally valid by a judge after the county took the matter to court. But the county is still refusing to provide the auditors access to the subpoenaed materials.

The county agreed to comply with the subpoenas after the late February ruling, but called for the audit to end less than a month after it had begun. County officials have noted that a hand recount and a risk-limiting audit performed at their behest uncovered no discrepancies. They voted this week to replace the machines the auditors examined, agreeing with Democrat Arizona Secretary of State Katie Hobbs that they can’t ensure that the machines will perform properly in future elections.

Fann noted that she wanted the audit done at county facilities, but was forced to have the audit teams conduct it offsite when the county declined her request. She also said senators have never implied or inferred that the discrepancies were caused by “intentional misdoings.”

“It is unfortunate that the county has been recalcitrant,” Peterson said at the hearing. “That doesn’t breed trust, it slows things down, it makes things difficult.”

He noted that if auditors don’t receive the requested items, they’ll produce “an incomplete report.”