Market Positioning And Drivers: Will There Be An “Everything Rally” Or Will Stocks “Risk-Off” Into Year-End? 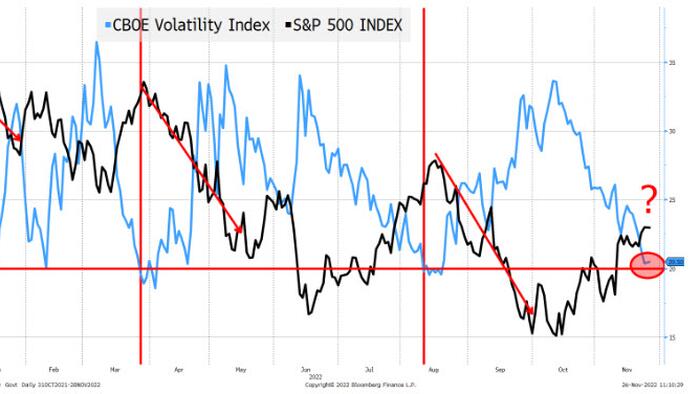 By Peter Tchir of Academy Securities

As we head into what in theory should be a quiet period for markets (though it certainly wasn’t in December 2018), we try to address positioning (very difficult to get a good read) and what our drivers for the next few weeks will be.

There are reports circulating that everyone is bearish. Those reports seem to focus on words (there is a lot of airtime being given to the bears) and on things like equity put/call ratios. The argument against looking at put/call ratios is that they have been oscillating back and forth (almost wildly) and they may not do a good job of capturing the weekly and daily expiration options markets. It is truly fascinating to watch (and to understand) the implications of the rise of daily expiration options. I cannot think of a more leveraged bet than daily and weekly options. Most (not surprisingly) expire out of the money, but the lottery ticket nature seems to encourage the large swings (in either direction) to become even larger (see “What’s Behind The Explosion In 0DTE Option Trading”).

This is an added dose of gamma to an already illiquid market – which is a recipe for large moves.

Measures like the CNN Fear & Greed index remain firmly in “Greed” territory. Certainly not “Extreme Greed” but not indicative that “everyone” is bearish. On AAII we pulled back from last week’s more bullish reading, but it is still more neutral than anything else.

Looking at QQQ RSI (relative strength indicator) it is by and large in the middle which indicates neutral positioning. Nothing in the “technical charts” I look at (not my area of expertise, but not something I ignore completely) was jumping out at me as bullish or bearish except for the VIX.

VIX has drifted back to just over 20, which has been problematic for equities this year.

Will VIX, QT, weakening economic data, and abysmal liquidity set up a December 2018 type of scenario?

Stock buybacks (which may be loosely interpreted as company positioning) influence markets and it seems like we have developed a pattern where we hold our breath during earnings season and breathe a sigh of relief as earnings are done and cannot undo any of the good that the buybacks have done. Unfortunately, this is a three-month cycle and by late December we go back to holding our breath again!

On the fund flows, ARKK hit a record for shares outstanding two weeks ago and has seen a slight pullback. TQQQ hit the record three weeks ago but has also seen small but steady outflows. I use those two ETFs as they capture the zeitgeist of the moment, and they seem to support the fact that markets actually got bullish and are now more neutral.

I see little evidence to support the “everyone is bearish” camp (at least not in equities). If anything, we could be setting up for selling pressure into year-end as the “Fed is slowing down on hikes” story is getting largely priced in. Additionally, the “need to chase seasonality” trade has been put on and quantitative tightening will (over time) give investors the opportunity to take less risk for similarly expected returns.

On the bond side, you could convince me that people are still too bearish (because that’s what I’d like to believe) and it may be true here, but with the recent move stopping out a lot of short positions, I suspect that bonds are more neutrally positioned.

With positioning likely neutral, markets will be influenced by data and important narratives. For the coming weeks and months  these are the drivers that we will be keeping a close eye on. They are what we will be examining closely to see if we need to adjust our opinions and outlooks on the economy and markets!

Longer-term factors. While these drivers are unlikely to cause major market moves in the coming weeks, they will shape next year, and it is important to keep an eye on how they are developing as getting these right will be a key component of successfully navigating 2023.

Sustainable AND Traditional Energy build-out. We need to build out sustainable energy faster and more aggressively than previously thought. We need to ensure that the backbone of our energy system is big enough (for long enough) to let that transformation occur smoothly. This will eventually be deflationary, but it will be inflationary in the near-term as immense amounts of money will need to be spent on the materials and people needed to create the world for which we are striving.

India. This is my “outlier” and doesn’t get enough attention. India is set to surpass China in terms of total population with a much better demographic mix! India is also set to gain China’s “losses” on the supply chain side. India was growing rapidly before Covid and seems to be back on that trajectory. There are many obstacles (some of which are their own making), but if there was one outlier that I’d be looking for it would be an “early 2000s like” China commodity boom! Let’s not forget that India is buying Russian commodities because cheap resources are critical for India. They work with Venezuela too and seem to be mimicking China’s playbook for resource accumulation in many ways. It seems shocking how seldom India comes up in conversations, yet this could be the shock to the global system for which we aren’t prepared.

I still like bonds, though less than I did a few weeks ago! The rally has been intense, and we are nearing levels that seem difficult to justify without much worse data coming through. From our key drivers section, I expect the data to be weaker than consensus, but if the bearish positioning has been reduced in bonds, it will take a lot more to propel them to much lower yields.

Skew positioning to the 2-to-5-year range as they should benefit the most as data comes in that compels the Fed to stop hiking sooner and the markets can price in a lower terminal rate. As of now, though there is more data to come, we can expect a 50bps hike in December, but that could be it (and might be too much). The market is pricing in a 5% terminal rate in May.  However, sub 4.5% appeals to me.

Commodities may continue to struggle here, led by energy prices. Recent price declines have not impacted stocks significantly, but that commodity weakness could translate into commodity stock weakness (XLE and XLM have been resilient, near the highs in XLE’s case, but look for some profit taking to weigh on these stocks as markets struggle to see growth into 2023).

I wouldn’t touch crypto with a ten-foot pole here. Maybe we see some of the various “exchange” and “custodial” entities and companies in the headline sort out their alleged issues and the market rebounds, but I don’t see that happening. Bitcoin should drift lower and sub $10,000 is my target (given everything that is going on and the number of questions institutional investors are facing).

Which leaves the question – will there be an “everything rally” or will it actually be “risk-off” into year- end for equities?

A week or so ago, I would have expected an “everything rally” into year-end. However:

Credit will outperform equities and there is a path to further spread tightening even if equities don’t rally. There are signs that some of the “hung” deals the banks have on the high yield side are working themselves out, so they won’t continue to be an overhang on the high yield and leveraged loan market. Maybe the pop, ironically, is more likely to occur in that space than in investment grade.

In any case, on an all-in yield basis credit looks good, but on a spread basis it is time to opportunistically reduce risk, even in the face of a light calendar. Hope you had a great Thanksgiving!