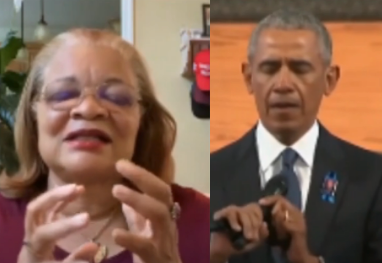 uring an interview with Fox News on Friday, Dr. Alveda King accused the left, including Obama, of being willing to “grab at any opportunity” to turn events such as the funeral of Lewis into “a political moment.”

She told “Fox & Friends,” that she should have expected Obama to take the chance to politicize the death of Lewis in order to attack President Donald Trump’s administration and to advocate for leftist positions during the eulogy.

“I’ve chosen not to politicize the death of Congressman Lewis, but to remember him as a peaceful, nonviolent warrior and encourage everyone to resolve our conflicts peacefully,” she said.

King went on to accuse Obama of misremembering history during his political eulogy in Atlanta Thursday by taking “us back to the 1960s.”

The former president compared the recent use of federal troops to quell rioting in Portland, Oregon, and other cities, with the civil rights movement of the 1960s, in which federal troops often dispersed demonstrations that were peaceful.

“Bull Connor may be gone, but today we witness with our own eyes police officers kneeling on the necks of black Americans,” Obama said. “George Wallace may be gone, but we can witness our federal government sending agents to use tear gas and batons against peaceful demonstrators.”

“Today,” King said, “when the National Guard goes in — sent by the president for example — or state troopers, they are trying to protect the people of America in every community. And, to save lives and protect people.”

“There is a totally distinct difference.”

“Even as we sit here, there are those in power who are doing their darnedest to discourage people from voting,” Obama said, “by closing polling locations, and targeting minorities and students with restrictive ID laws, and attacking our voting rights with surgical precision, even undermining the Postal Service in the run-up to an election that’s going to be dependent on mail-in ballots so people don’t get sick.”Advertisement – story continues below

King took issue with the comments from the former president.

“You know, actually President Trump is saying, ‘People, please pay attention. We do want you to vote. Use your absentee ballots. Go to the polls.’ He has even encouraged, you know, people to be poll watchers and poll workers and that kind of thing,” she said.

“President Trump is not trying to suppress the vote,” she added.

“We do want people to vote safely. And, we need the voting process to be fair. And so, to politicize the funeral of a peaceful warrior — I mean, I guess they grabbed at an opportunity to be political,” she stated.

Obama was criticized for delivering what was essentially a campaign speech as the eulogy for Lewis Thursday.

The former president also advocated for statehood for Washington, D.C. and for ending the Senate filibuster during the political eulogy.