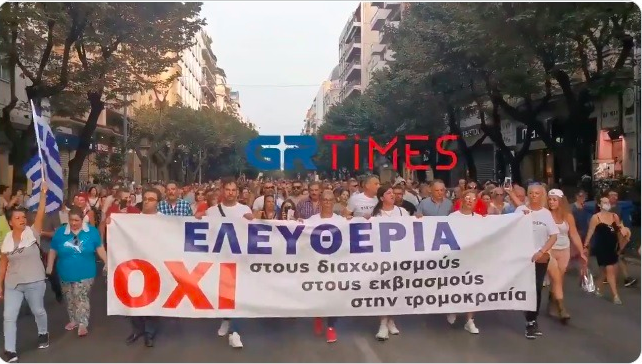 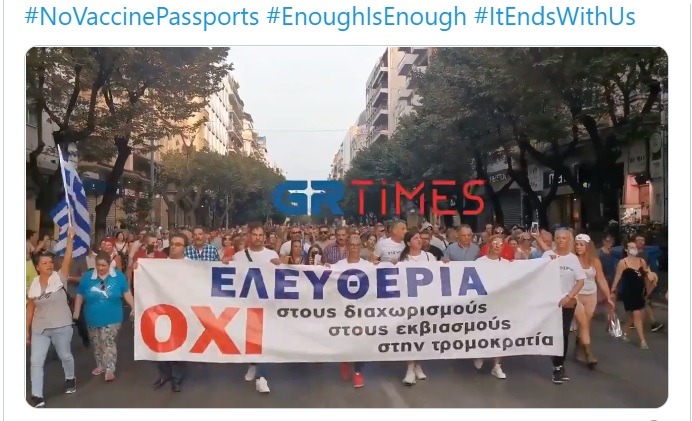 “Hands off our kids!”

Greece has become the latest European country to be hit with mass protests after the government announced the unvaccinated would be banned from visiting bars, restaurants, cinemas and other public places.

Thousands of demonstrators descended on Athens and Thessaloniki, with crowds chanting “Hands off our kids!” and holding signs that said “We say no to vaccine poison.”

All nursing home staff and hospital workers will be mandated to get the vaccine from August 16, while hospital workers also face losing their jobs unless they get the compulsory jab from September.

Teens as young as 15 will also be encouraged to get the vaccine with parental permission, another change that has angered protesters.

Prime Minister Kyriakos Mitsotakis effectively said that the new measures, which go into effect on Friday and will remain in place until the end of August, were a punishment for Greeks enjoying themselves too much and refusing to take the vaccine.

“After a year and a half, no one can claim ignorance about the coronavirus anymore,” said Mitsotakis. “The country will not shut down again due to attitudes adopted by certain people… It’s not Greece that’s a danger, but unvaccinated Greeks.”

As we highlighted yesterday, police in Paris were forced to used tear gas to disperse rioters who were irate at the government’s plan to impose similar measures, including banning the unvaccinated from public transport.

Cities across France were hit with unruly demonstrations, with the Yellow Vest movement, which ended as a result of the first lockdown in March 2020, seemingly being resurrected.

There are plans to implement some form of ‘vaccine passport’ in virtually every major western country, but judging by the response so far, it will face massive resistance from the public.

Massive protests all over Greece today after the prime minister issued what is essentially medical apartheid. The media is trying to spin it as an “anti vaccine” protest instead of what it’s really about : freedom of choice and bodily autonomy. https://t.co/tR2SoRlOc6