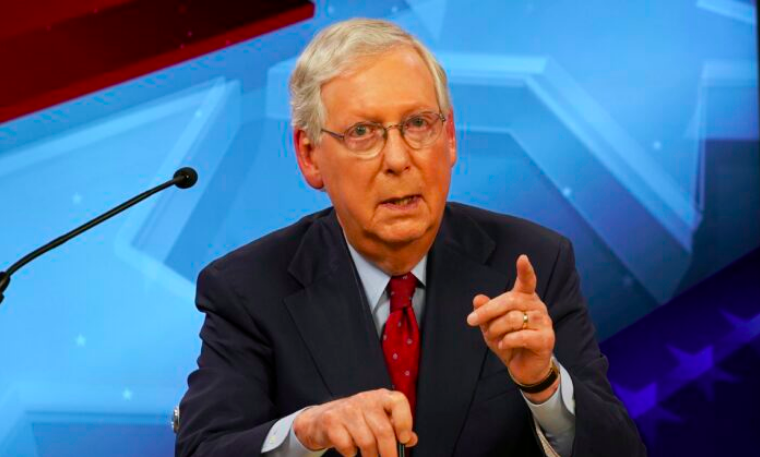 Senate Majority Leader Mitch McConnell (R-Ky.) said that the Senate will take up the nomination of Judge Amy Coney Barrett to the Supreme Court on Oct. 23 with a final vote scheduled for Oct. 26.

The Judiciary Committee is expected to approve her nomination on Oct. 22, he told reporters on Thursday, adding that he has the votes to confirm her to the court.

“We’ll go to the floor on Friday the 23rd and stay on it until we finished. We have the votes,” McConnell said.

When McConnell brings her nomination to the floor of the upper chamber, the Senate will then debate and have a procedural vote, leading to the final confirmation.

On Friday, the majority leader praised Barrett, who was nominated by President Donald Trump, and said in a statement that “exhibited every bit of the intellectual brilliance, legal expertise, and open-minded judicial temperament” necessary to serve on the Supreme Court.

“I will proudly vote to confirm Judge Barrett, and will lead the full Senate to take up her nomination as soon as the Committee reports it out next week,” he added.

Furthermore, he argued that the confirmation process of Barrett falls “within history and precedent.” Some Democrats had argued that the winner of the upcoming presidential election should be the one to decide who sits on the Supreme Court after the late Justice Ruth Bader Ginsburg’s death last month.

The only GOP senators who have said they would not vote in favor of Barrett are Sens. Susan Collins (R-Maine) and Lisa Murkowski (R-Alaska). Sen. Mitt Romney (R-Utah) this week again said he would cast his vote in favor of her, giving Republicans the edge.

No Democrat is expected to vote for Barrett’s confirmation to the top court.

Barrett underwent several days of confirmation hearings this week in front of the Senate Judiciary Committee and didn’t answer some of Democrats’ key demands, including on climate change or whether the president could delay the election.

During the hearings, Democrats attempted to delay them, leading to a debate on the floor.

“This rushed, sham process is a disservice to our committee,” Sen. Richard Blumenthal (D-Conn.), who introduced the motion, said on the floor. “The purpose of doing it is simply to have a justice on the Supreme Court, as the president has said, to decide the election and to strike down the Affordable Care Act.”

The motion was ultimately defeated after causing about a two-hour delay in the hearing in which two representatives of the American Bar Association (ABA) and eight witnesses testified on Barrett’s character, qualifications, and record. Barrett was not in attendance at Thursday’s hearing.

Janita Kan contributed to this report.