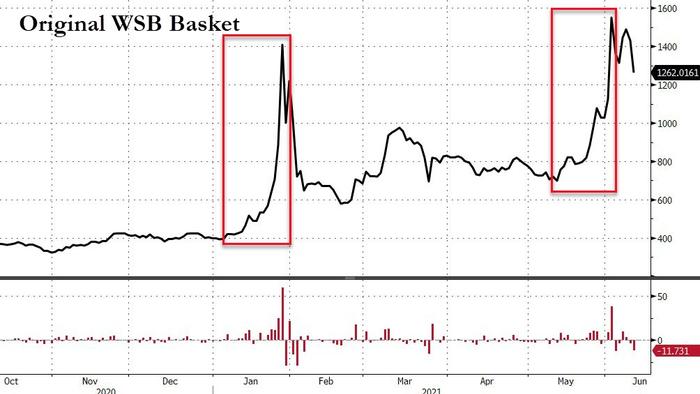 “Fool me once, shame on… shame on you. Fool me… you can’t get fooled again,” were the infamous words of former President Bush and we suspect that Steve Cohen protégé Gabe Plotkin is reflecting on those stoic words as he looks back at his fund’s performance in May.

Plotkin’s Melvin Capital – infamously blown-up by a retail rampage during January’s WSB Raid on heavily-shorted stocks – was joined by another fund, Light Street Capital, run by Glen Kacher (a Tiger Cub) in suffering significant losses as the sense of deja vu all over again in markets sent the most-heavily-shorted ‘Meme stocks’ soaring to even higher highs once again in May.

As The FT reports, hedge fund losses just from betting against five popular meme stocks – GameStop, Bed Bath & Beyond, AMC, BlackBerry and Clover Health – total about $6bn since the start of May, according to the data firm Ortex Analytics.

It appears the bailout of Melvin Capital (which after sustaining a $4.5bn loss in January got $2.75bn in new cash from Cohen’s Point72 Asset Management and Ken Griffin’s Citadel) was used to maintain his big shorts… and suffer a Sisyphean loss on his shorts once again.