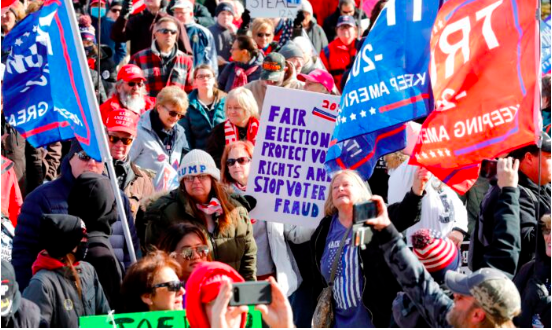 A Michigan Republican Party official who blamed former President Donald Trump for losing the 2020 election has stepped down.

Jason Roe, who became the executive director of the Michigan GOP in February, told news outlets he stepped down and informed Chairman Ron Weiser.

“I resigned my position as executive director and the reasons will remain between me and Chairman Weiser,” Roe said. “We’ve built an amazing team and I know they will be very successful in 2022. I look forward to helping however I can.”

Former and current Trump officials did not immediately comment on the resignation.

Roe, at the time a Republican strategist, told Politico in November 2020 that Trump “retains a hold that is forcing party leaders to continue down the path of executing his fantasy of overturning the outcome—at their own expense.”

“Frankly, continuing to humor him merely excuses his role in this. The election wasn’t stolen, he blew it. Up until the final two weeks, he seemingly did everything possible to lose. Given how close it was, there is no one to blame but Trump,” he added.

In another interview in May, Roe doubled down on his comments, claiming Trump “was seemingly doing everything he could to lose a winnable race.”

Trump received 232 electoral votes to President Joe Biden’s 306, losing several key swing states that he had won in 2016. Trump lost Michigan by over 150,000 votes after beating Hillary Clinton there by about 11,000 votes four years prior.

Roe’s remarks prompted Republican delegates to call on party leaders to oust him.

“While there are a few activists who want to shrink our party and are focused on fighting with other Republicans, my team is focused on growing our party and fighting our true opponents, the Democrats,” he said in a statement to news outlets. “That is where our focus will remain, and I’d encourage everyone to channel their frustration toward winning in 2022, not attacking each other. The Democrats are the only ones who benefit.”

Debra Ell, who helped organize the effort to oust Roe, said in a statement that she believes Roe was fired.

“This is just beginning of the RINO Hunt,” she said, referring to “Republicans in Name Only.”

“He was so arrogant to blame the 2020 election ‘loss’ on our Republican president not the Democrats and cited ‘there was no fraud.’ So he’s calling out our president, hundreds of affidavits from Republicans who were there and now Republican legislators and candidates who say differently,” she wrote.

After Roe’s resignation, Weiser said the official “did a tremendous job putting together a team and getting us ready for 2022.”

“We wish him nothing but the best and know he will be an asset to Republicans in Michigan and all over the country this cycle and for years to come,” he said.