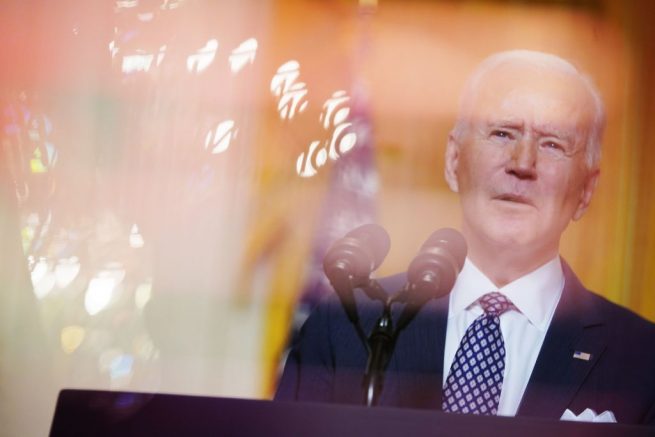 Seen through a translucent “On Air” sign, Joe Biden speaks during the virtual Munich Security Conference in the East Room of the White House in Washington, DC on February 19, 2021. (Photo by MANDEL NGAN/AFP via Getty Images)

Throughout his speech, Biden reinforced the alliance between the U.S. and Europe. He said the United States will “work in lockstep with allies and partners.”

While discussing China, Biden gave a mixed message by saying he welcomed the competition. He later added the U.S. and its allies must fight against China’s abuses within the global economic system. Biden stated:

“Competition with China is going to be stiff. That’s what I expect and that’s what I welcome because I believe in the global system. Europe and the United States, together with our allies in the Indo-Pacific, worked so hard to build over the last 70 years. We have to push back against the Chinese government’s economic abuses and coercion that undercut the foundations of the international economic system.”

He also claimed the U.S. and its European allies must come together to protect the “free exchange of ideas in open democratic societies.”

Richard Grenell, a former intelligence official under the Trump administration, took to Twitter to comment on Biden’s speech. He claimed “Biden’s America will not be first.”

Biden says America will not be First. https://t.co/EZKSoKq13i

The Trump administration was known for prioritizing the U.S.,  which often involved ending partnerships the administration considered harmful to the nation.

RELATED: Republicans Warn Against Moving Away From Trump Legacy As GOP Moves Forward